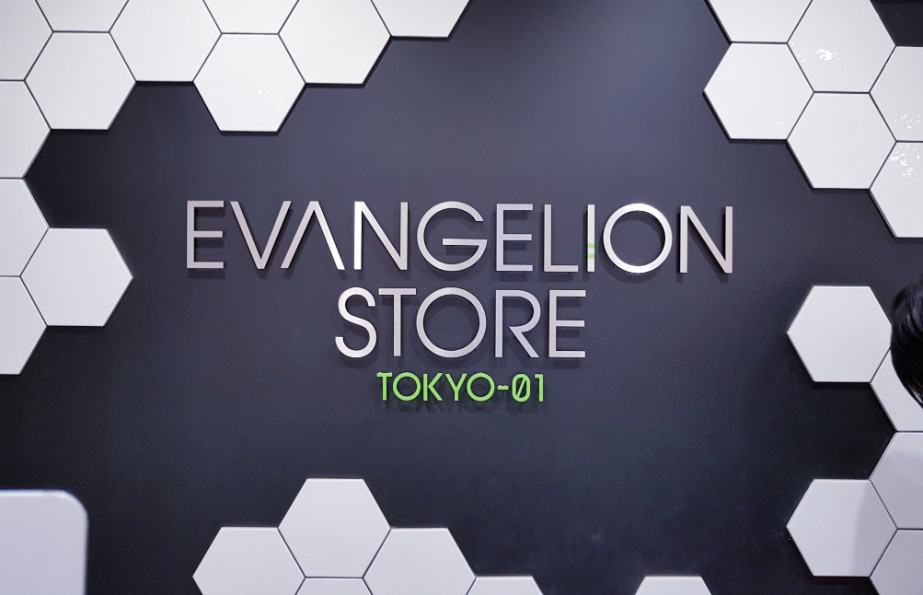 Evangelion Store is located in Ikebukuro on the second floor of P’Parco, a shopping complex hosting trendy clothing and stores relating to anime and pop culture.

It’s been at its current home in P’Parco since 2014 after it relocated from its old spot in Harajuku. 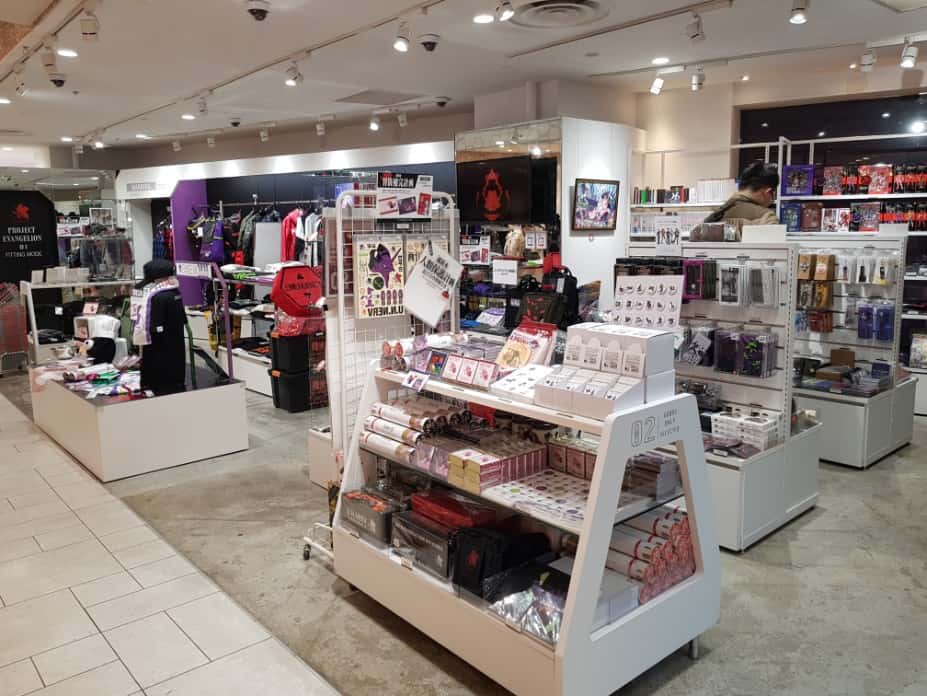 Easy to find on the second floor, you’ll find a small but fairly dense store with a very good selection of rare and strange Evangelion goods (among the more practical) that are fun just to browse. 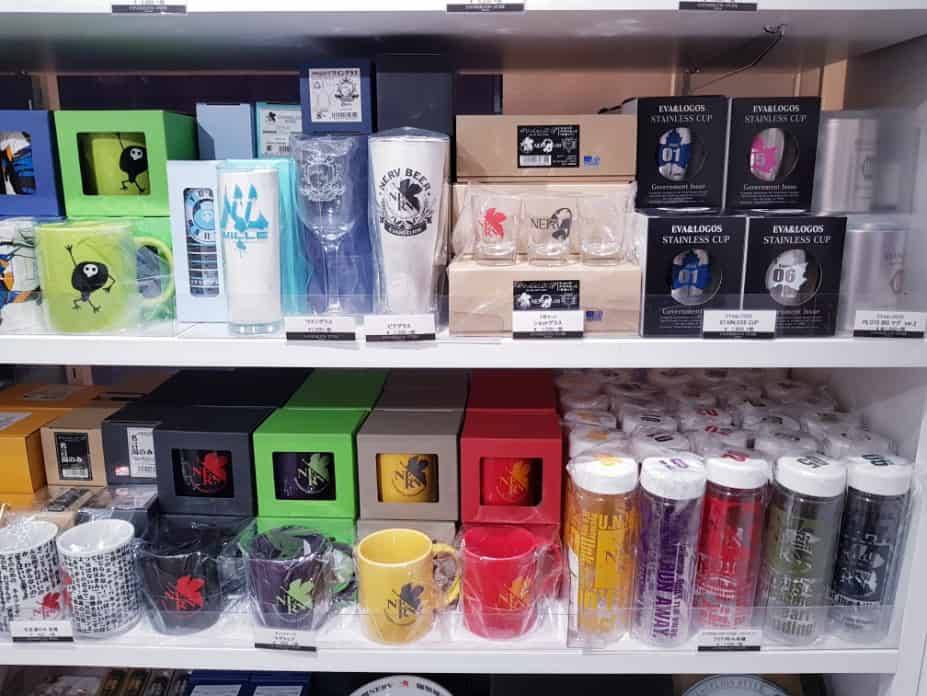 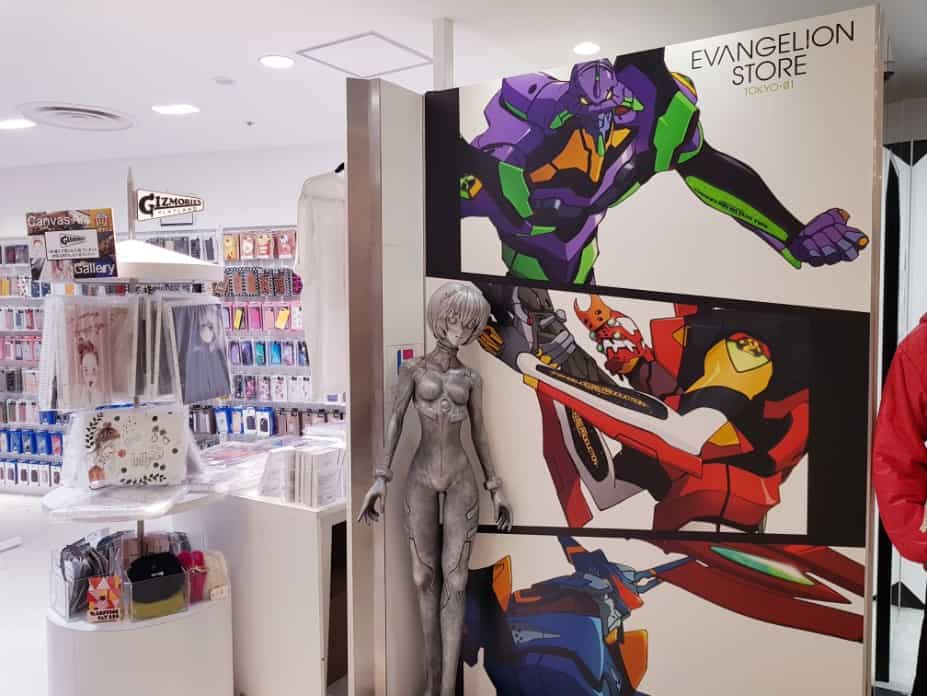 The store itself is loosely designed with NERV’s high-tech and hexagon visuals and manages to equally appeal to both the trendy atmosphere of the mall, as well as the otaku crowd. 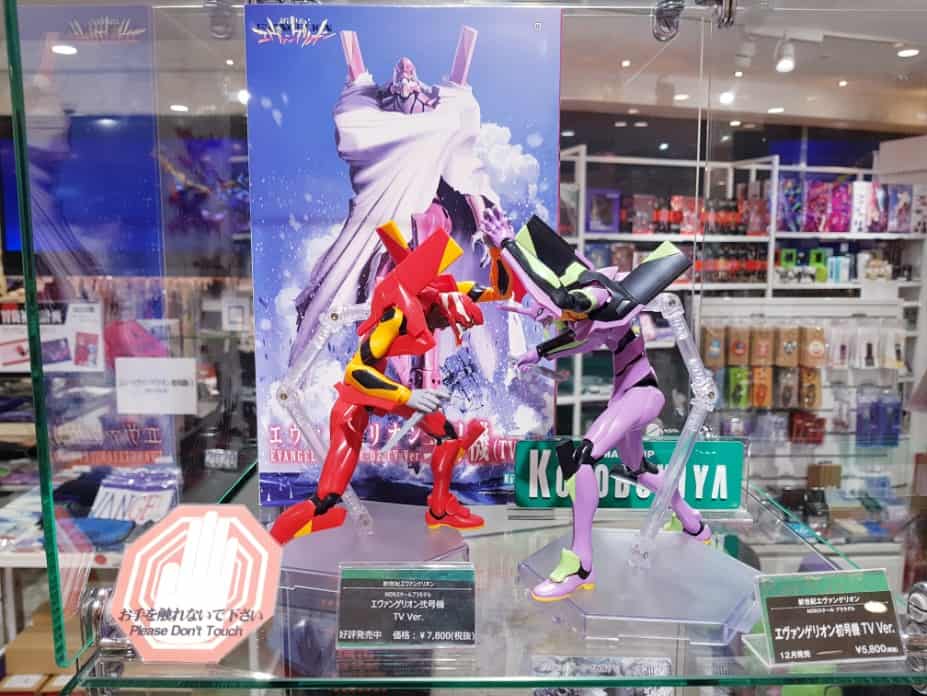 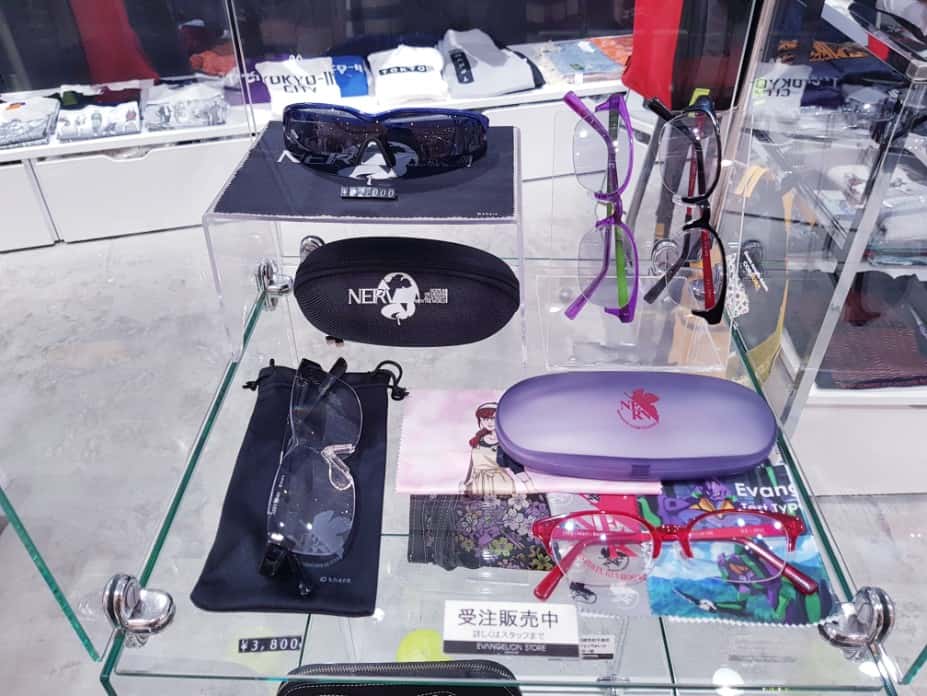 If you’re a big Evangelion fan, it’s easily one of the best things to do in Ikebukuro.

Here’s a list of some of the store’s selection so you can get an idea:

(Many of these goods rotate out for new arrivals, so they may be different on your visit) 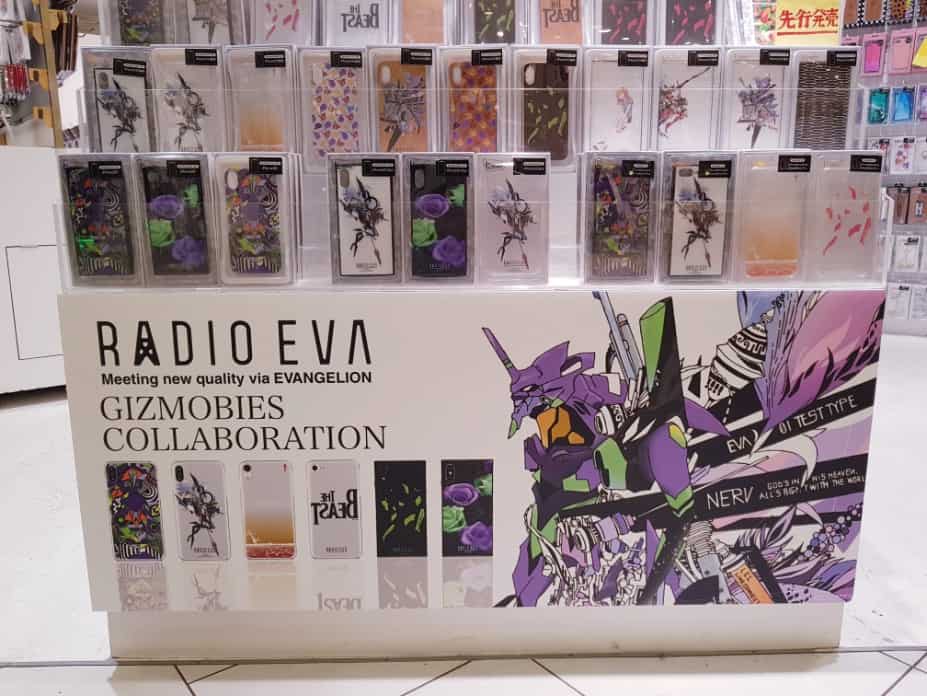 Cost-wise, for smaller items like keychains and smaller accessories they start at around 500 yen and up, a normal enough price for those kinds of character goods.

Some of the store-exclusive items, particularly the fashion (Eva jackets are 10,000+) and larger purchases like scale figures can lean pricey, but can easily be worth it depending on the item. 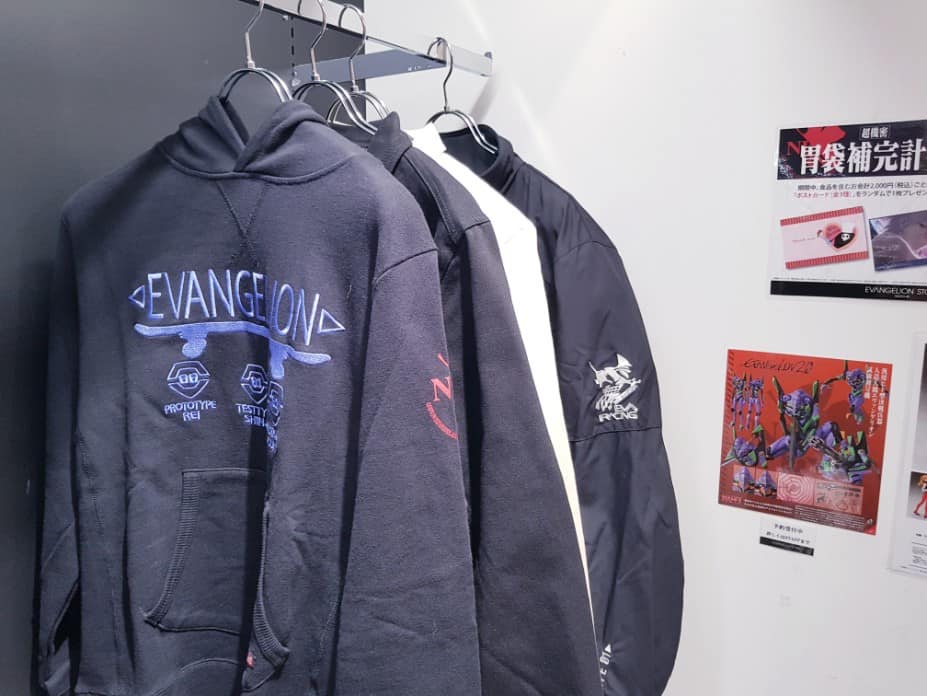 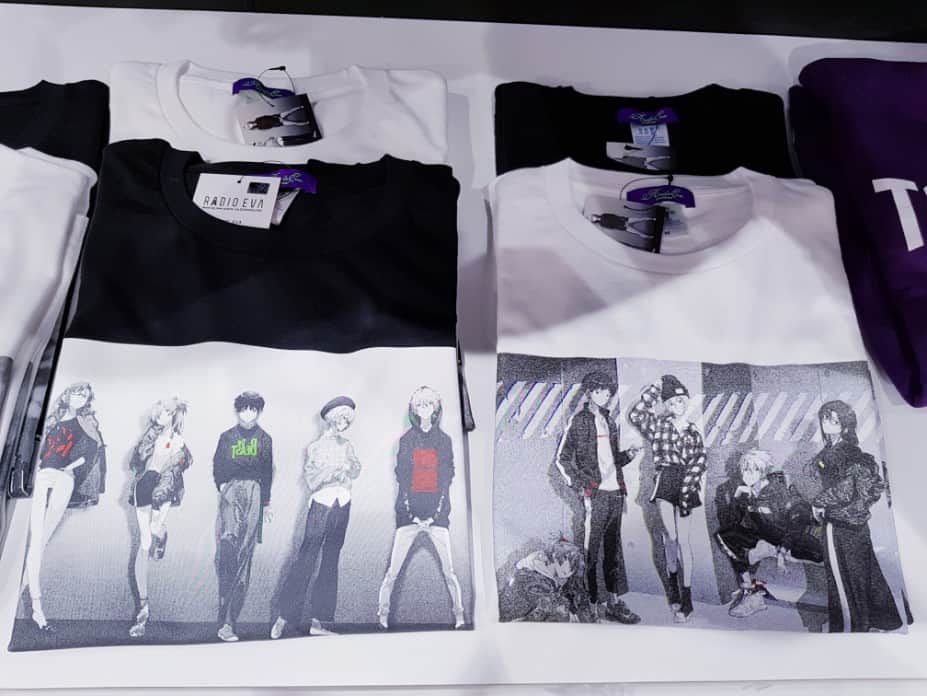 If you are looking for more Anime T-Shirts don’t forget to visit the following article:

The store has a bit of everything for everyone, and you’ll likely find something subtle enough or blatant and Eva-emblazoned enough to take home with you.

If funny Japanese product ideas are your thing, this place will definitely remind you that Evangelion is the king of bizarre character goods. 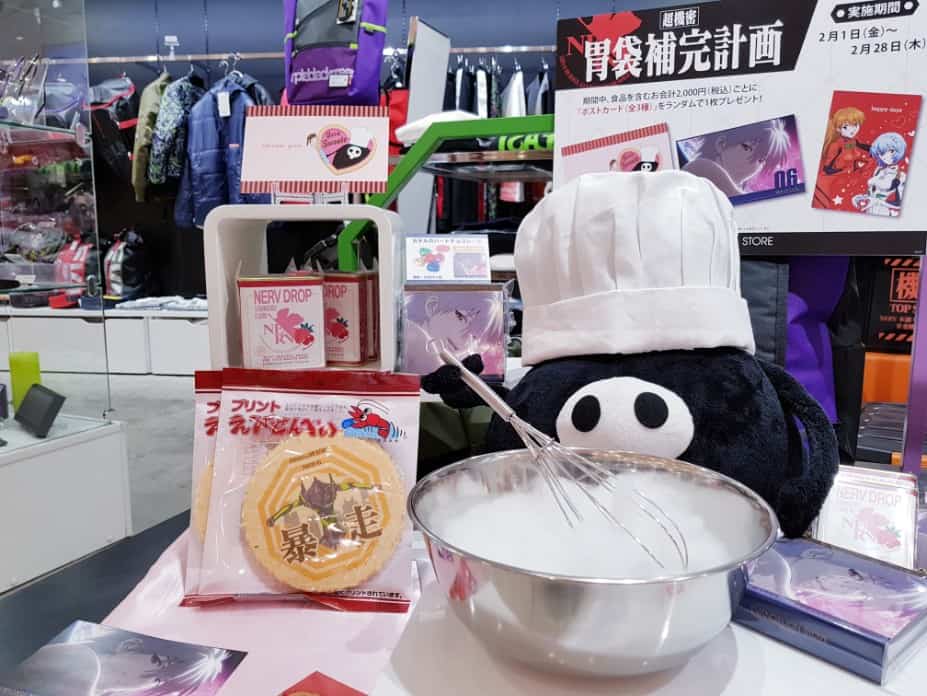 Some of the fashion is on the more expensive side, along with whatever high end limited run items they’re selling, but you’ll also find tons of cool and reasonably priced Eva goods you won’t find anywhere else. I definitely recommend checking it out, especially if you’re looking to get some out of the ordinary Eva goods while you’re in Tokyo. 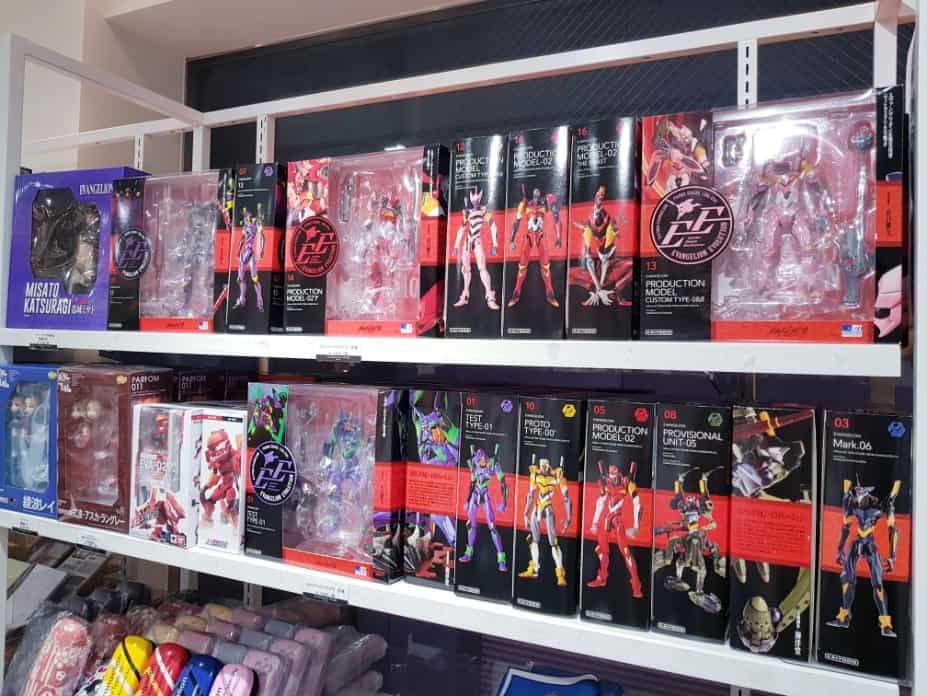 Since a lot of cool anime stores centered around a single show are pop-up stores and only temporary, this is one of the best anime stores around Tokyo to visit since it’s here to stay and always getting new and interesting merchandise.

As someone who likes Evangelion a lot, I think anyone on the same boat will come out of this place satisfied.

On a side note, for older rare Eva goods and figures from years past, or just the figures from Eva store at a lower price, I’d recommend checking out Nakano Broadway and the Akiba Cultures Zone building in Akihabara, both of which I consider high priority in anime tourism for shopping and as popular anime districts.

Also if you’re visiting Mount Fuji and the nearby amusement park Fuji Q Highland, I recommend you visit Evangelion World and the second Eva store they have there! If you want to know more, we have an article up right here.

Evangelion Store is a very short walk from Ikebukuro Station’s East Entrance, just turn left and keep walking until you hit a small crosswalk, where you’ll see the P’Parco building to your left. (Note that P’Parco is different from Parco which is another building very nearby. Mind the P’ 😀

If you need more information visit the website of the store. 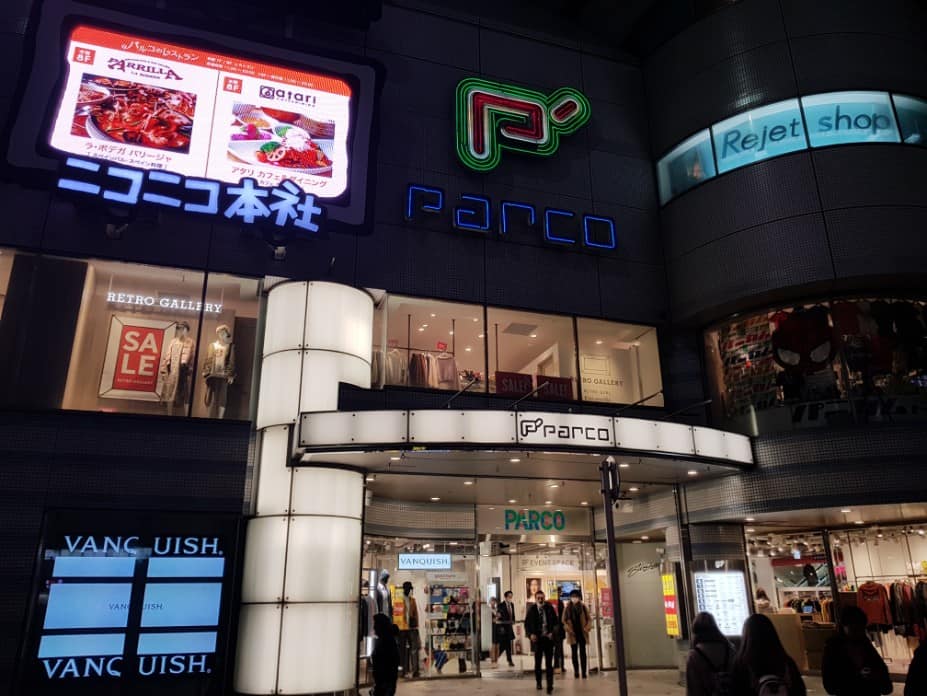 A recommended route: If you’re arriving via Ikebukuro station, I’d recommend starting out at P’Parco/Evangelion Store, easily accessible by the station’s East exit.

When you exit P’Parco, just take the downward ramp into the tunnel that’ll take you to the other side of Ikebukuro Station’s train tracks where you can walk about 10 minutes to Ikebukuro Marui department store.

After you’re done, go back to the front of P’Parco the way you came and make your way towards the entertainment district where you’ll find Sunshine City’s Pokemon Center and Otome Road. From P’Parco, you can walk there in another 10 minutes. If you don’t know what Otome Road is, it’s a cosplay and anime store hotspot which you can read about here.

Now that you’ve explored a good section of Ikebukuro, and seen what this anime hotspot has to offer, it’s time to pay your respects to the man who made it possible. Osamu Tezuka, creator of Astro Boy is often called the god of manga and drew his manuscripts at his apartment studio just minutes away. Ride two stops on the Toden Arakawa line streetcar, (which Tezuka himself used to ride in the 1950s) from Higashi-Ikebukuro 4 Chome Station down to Kishibojin-Mae Station and walk 3 minutes to get to the apartment.