Super Saiyan God – All You Need To Know 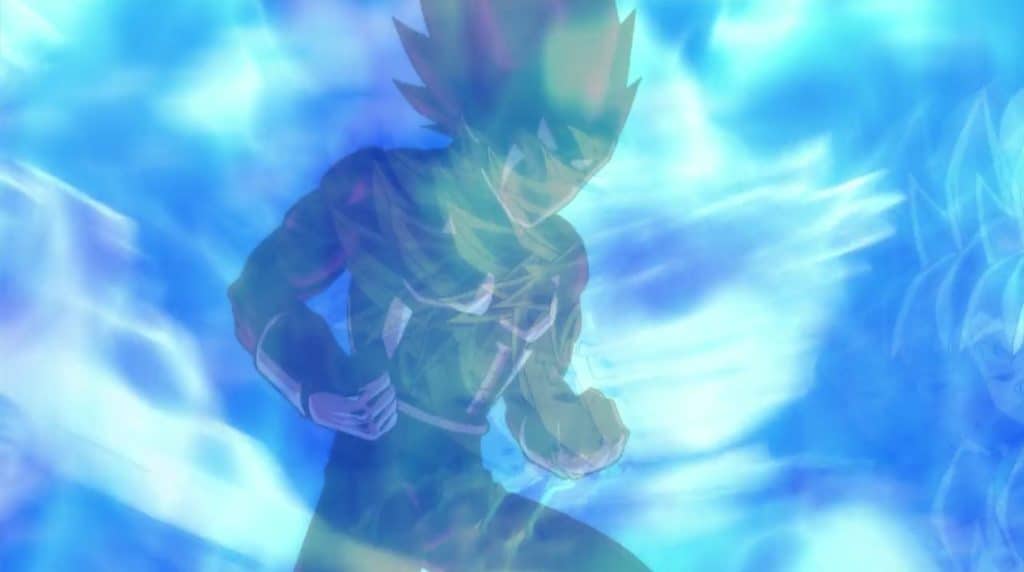 This is the most complete guide of the Super Saiyan God.

No theories. I will avoid assumptions and include only 100% official information.

Here, I will tell you everything you need to know about the Super Saiyan God.

Before I deep dive into the Super Saiyan God, let’s first talk about the legendary Super Saiyan.

The Frieza Saga was the first time that the legendary Super Saiyan was introduced.

“The last Super Saiyan supposedly existed over 1,000 years ago. That was nothing more than a legend that I never actually never believed to be true “. – Vegeta

Since that moment, a lot of fans have created hundreds of theories about their true identity. For example, some claim that it is Broly, others that Bardock, Goku, and recently Kale or Caulifla.

Note: King Kai was the first to talk about the legend of the Saiyan, but he never mentioned the word Super Saiyan. I will talk about this later, so keep reading!

Denying the theories of the legendary SSJ

Broly is not the Legendary Super Saiyan for the pure and simple reason that the trilogy of his films are NOT canon.

Akira Toriyama confirmed it on the official website of DB Super movie: Broly.

Still, even though the trilogy is not canon, the most recent movie (Dragon Ball Super: Broly) is considered canon. Toriyama preserved the essence of it, great news, right?

Kale and Caulifla cannot be eligible either because they are from Universe 6. Remember that the legend that Vegeta tells refers to universe 7.

The myth that Vegeta reveals happened before Goku was born. So, the protagonist of Dragon Ball is also out of the running.

Goku could be considered the Legendary Super Saiyan of this era. Because as the legend says, every thousand years, a Super Saiyan that can surpass any limit appears. Goku fits with this description.

But this last paragraph is my personal opinion.

I know you are anxious to know who the legendary Super Saiyan is. Just read a bit more, and I promise you that you will not regret it 🙂

The Legend of the Super Saiyan God

If the mystery of who the Legendary Super Saiyan is was not enough; now, we also have to ask ourselves about the original Super Saiyan God.

“This is what is said in Namekian Book of Legends: Should five Saiyans of righteous heart to one pour out their hearts hand-in-hand he then shall become the Saiyan God. That is to say, become the Super Saiyan God.” – Shenron

In Dragon Ball Super, Shenron talked for the first time about the Namekian book of legends. No one else has ever pointed out again that book in the entire Dragon Ball universe.

Again, there is no more official information about this book. You will read assumptions, theories, or fan creations if you google it.

You might be wondering, “Hey Alfred, but King Kai also talks about the Super Saiyan God, does he not?”

In episode 20 of Dragon Ball Z, King Kai only referred to a God that was on the planet Vegeta. He never uses the word Super Saiyan.

Akira Toriyama confirmed this in an interview for the Shonen Jump magazine in December 2017.

That’s where he revealed the great secret.

Interviewer: The “Legendary Super Saiyan” that Frieza is afraid of, is he the one that appears in the Battle of the Gods?

Akira Toriyama: In a sense, they are the same person. A long time ago, before Planet Vegeta was the planet of the Saiyan, there was a man named Yamoshi, who despite being Saiyan had a good heart. He and his five comrades started a rebellion. Yamoshi was cornered in the war and became a Super Saiyan for the first time. Although his transformation and fearsome fighting style surprised the other Saiyans, he was outnumbered. Yamoshi eventually wore out and was defeated. However, this was only the beginning of his legend. Later, the spirit of Yamoshi wandered in the continuous search of six righteous-hearted Saiyans, seeking a new savior: the Super Saiyan God.

Note: I did the translation of the interview directly from Japanese. So, I can guarantee that you did not miss any vital information.

If you have read my other posts, you will know that I confirm all my translations with my Japanese girlfriend and Japanese friends.

Yamoshi in the movie Battle of the Gods

Yamoshi appears in the Battle of the Gods when Goku, Vegeta, Gohan, Trunks, Goten, and Videl make the ritual of the Super Saiyan God.

The silhouette of Yamoshi appeared. We could say that his spirit manifests during the rite.

Yamoshi in the manga and anime of Dragon Ball Super

On the other hand, in episode 9 of Dragon Ball Super, Beerus only remembers a vague image of a Saiyan. I cannot tell whether Yamoshi’s soul appears when Goku is about to become Super Saiyan God.

In the manga and at the end of episode 12 in the anime, Yamoshi talks with Goku.

Note: In the movie, that scene does not appear.

I would like to end this section with a small summary of everything we know about Yamoshi:

That’s all the OFFICIAL information available about Yamoshi.

There is no more, if you search you will find pure speculation and theories.

How to become a Super Saiyan God?

As Shenlong mentions, through the ritual of the Super Saiyan God. The ceremony consists of five righteous-hearted Saiyans holding hands.

The other method is through arduous training to obtain the Ki of a God.

For example, Whis trains Vegeta and Goku and teaches them how to use the Ki of a God.

Note: the second method is supposition. But that is how it is believed that Vegeta obtained the God form. I will talk more about this a bit later. Keep going 😀

Also, do not forget that it is also necessary to have the S cells. In an interview for Shonen Jump, Toriyama said that S cells are the cells that the Saiyan have.

Super Saiyan Blue is the next phase after having obtained the God Ki. But what is the correct term?

In the film Resurrection of F or Episode 24 of Dragon Ball Super:

“It’s complicated to explain, but it’s a Saiyan with the power of a Super Saiyan God as Super Saiyan.” – Goku (Japanese original)

In the manga, Whis refers to the next phase of the Super Saiyan God as “Blue”. 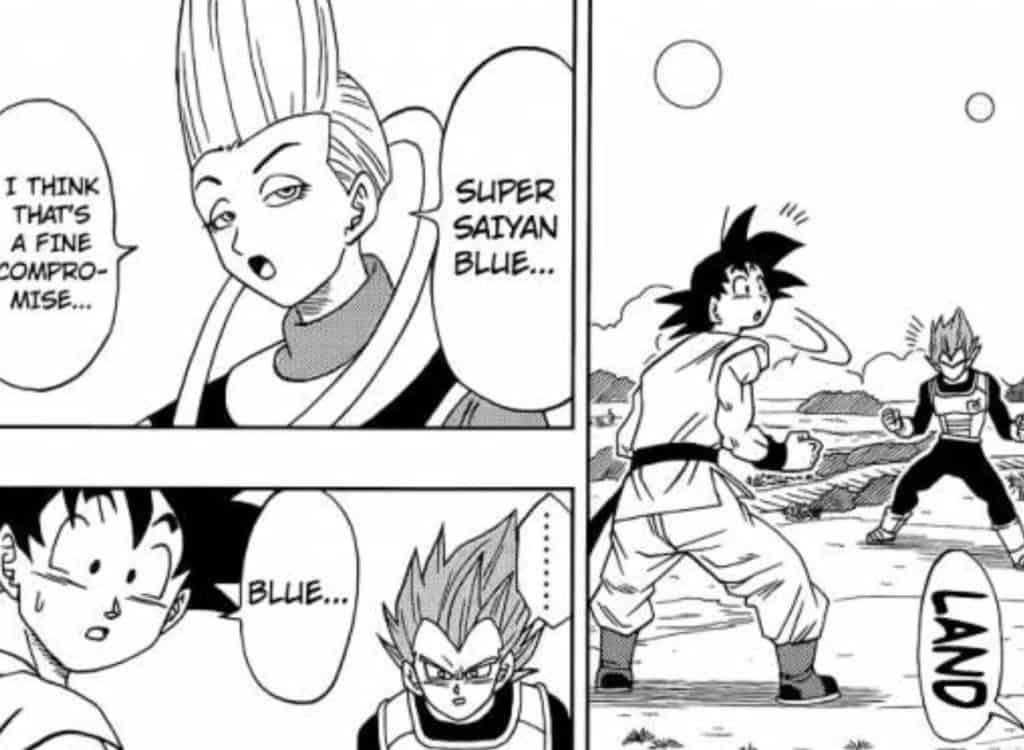 In the manga, we see Vegeta for the first time with red hair when he fights against Goku Black. 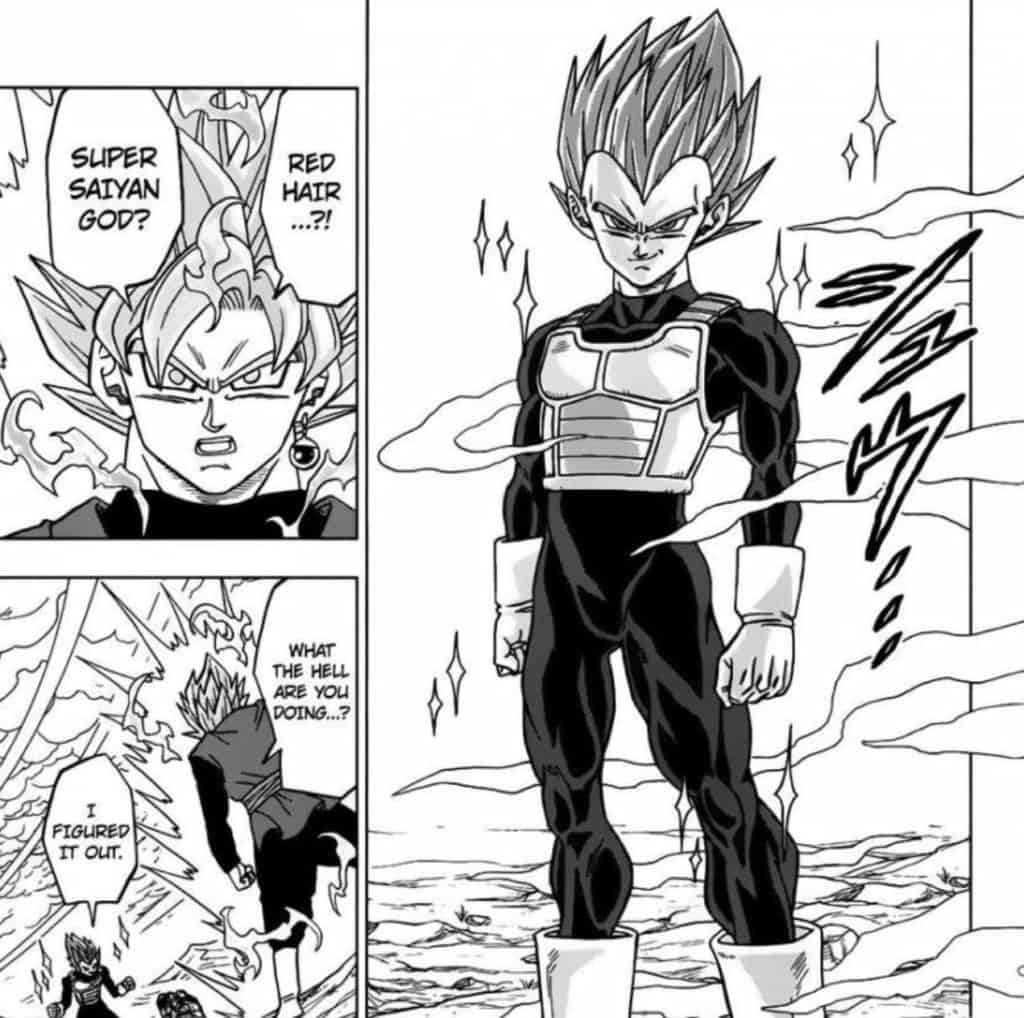 And in the most recent movie (Dragon Ball Super: Broly) also appears with red hair.

How did Vegeta become a Super Saiyan God?

Vegeta trained with Whis for 6 months, and the angel was the one who taught Vegeta how to control his Ki.

During that training, it is believed that Vegeta reaches the God phase and manages to become Super Saiyan God.

“No matter how much you train, you can never beat Beerus-sama. You have to learn to control your ki first. “- Whis

In episode # 123 of Dragon Ball Super, we look at Vegeta’s new transformation.

“He has a power superior to Super Saiya-jin Blue.” – Great Priest

Vegeta’s new transformation has no official name in the anime.

So, you can also refer to Vegeta’s new phase as “beyond Super Saiya-jin Blue” or “Super Saiya -jin Blue evolution “

“The evolved version of Vegeta Blue is an anime original. As you said (Karipa-san), it is a way that he (Vegeta) increased his strength in a different way than Goku’s. Strength-wise, please think of it as about the same as Goku’s Blue Kaio-Ken. “- Megumi Ishitani

Remember that there are two methods to get the Ki of a Saiyan God, through the ritual or an arduous training.

Trunks, by not doing one any of the two methods, could not become God Super Saiyan.

There is no official information about Trunks’ new phase. So, we can only suppose that Super Saiyan Anger is a “power-up” of the Super Saiyan 2.

Dragon Ball Heroes dubbed Trunks’ new power increase as Super Saiyan Anger. In the anime, it was not given a name.

Assumption: Following the same logic of how to obtain the God Ki, it is possible that any Saiyan with a noble heart can become a Super Saiyan God.

If we compare the power of Migatte No Gokui and the Super Saiyan God, the former is more powerful.

Btw, do not call him Super Saiyan Gray.

The correct naming is Migatte No Gokui or Ultra Instinct in English. 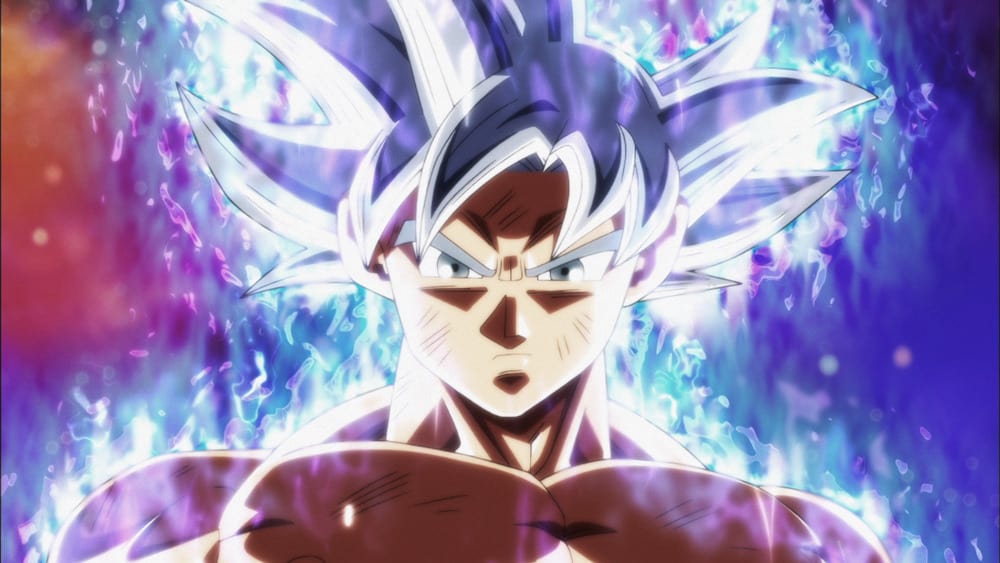 As you read, there are many mysteries left hanging around the Super Saiyan. I hope that Toyotaro in the new arc: the Galactic Patrol Prisoner will solve many doubts about the origin of the warrior race.

There is a lot to digest in this article. It ended up going way beyond the post I initially intended to write. But I hope that you enjoyed it.

Vegito Blue or Gogeta SSJ4, who do you think is stronger?

Did I miss anything in this guide?

Do you think that Dragon Ball GT is canon?

Let me know in the comments!