Pokémon – 10 Must Visit Attractions in Japan 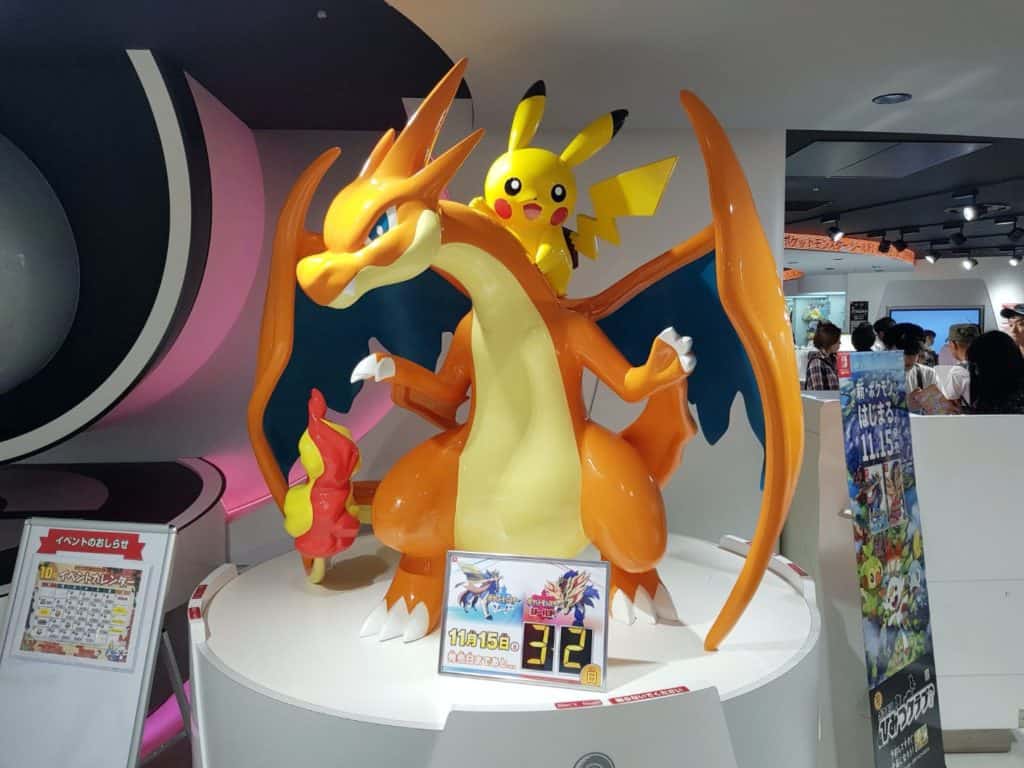 Pokémon is everywhere in Japan. Really, everywhere. Look! Under the floorboards!

Whether you’re fishing a Pikachu plush out of a UFO catcher or digging into his face for some Pikachu shaped omelet-rice din-din, the old adage has never been truer than in Japan:

We all live in a Pokémon world. 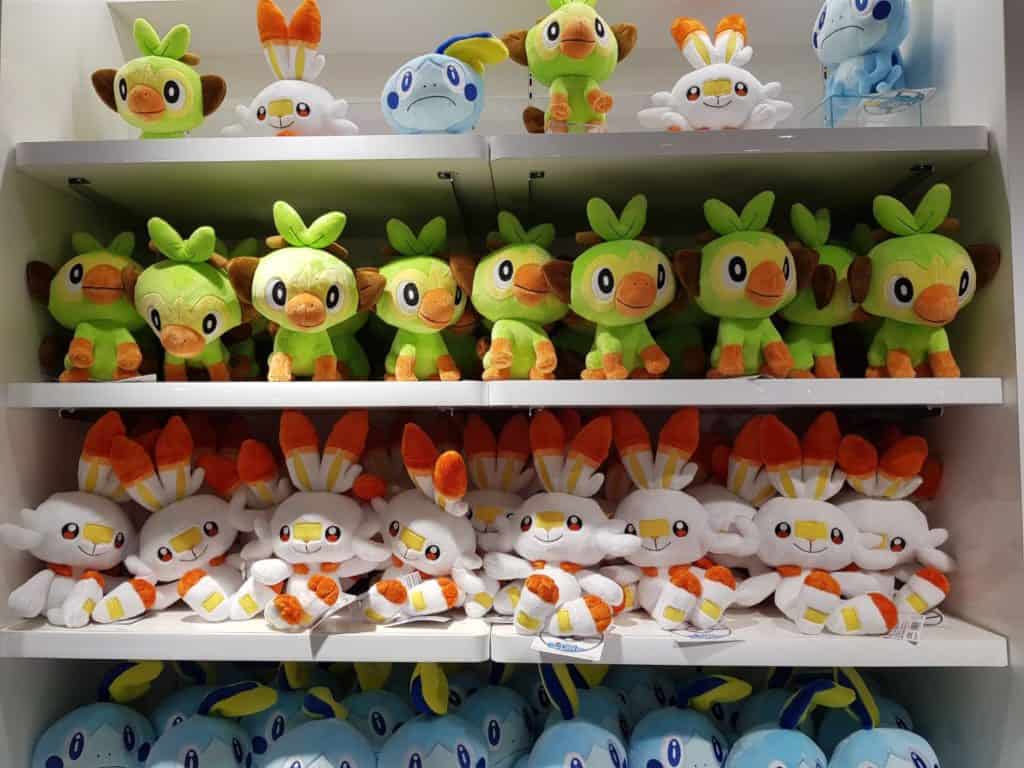 The attractions are more than café and the store though, let’s check out all the Pokémon related places in Japan. Use the power that’s in my hand. 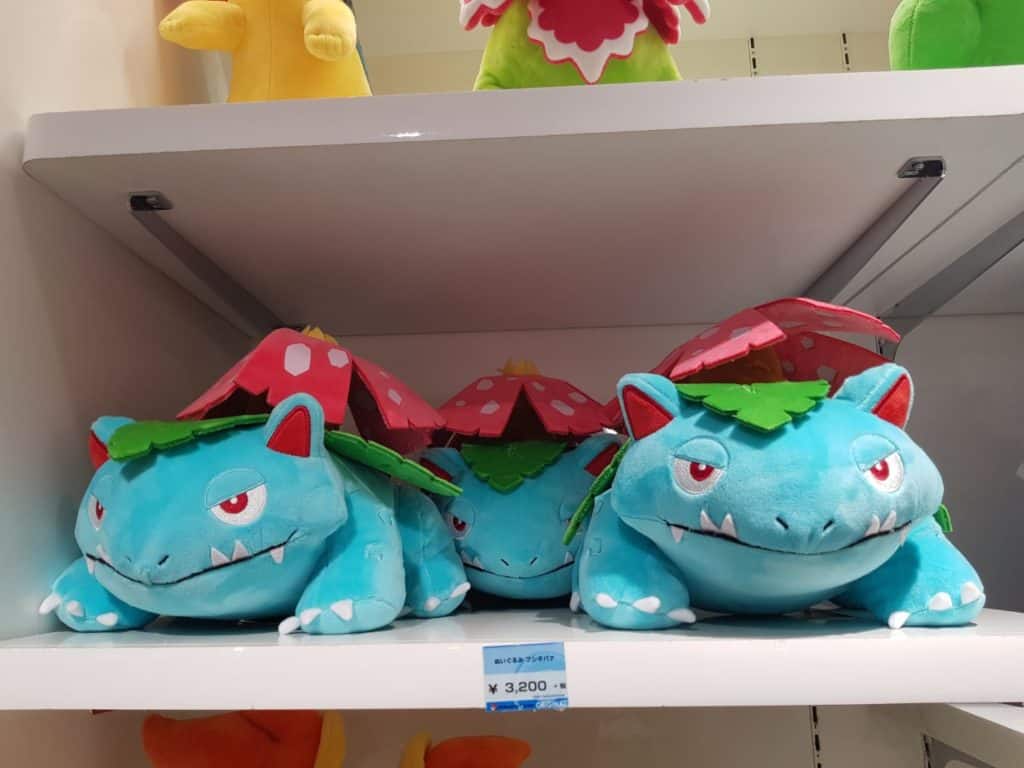 Pokémon Centers, just like their in-game counterparts, can be found in major cities all around Japan. There are six stores in just Tokyo and Yokohama alone. 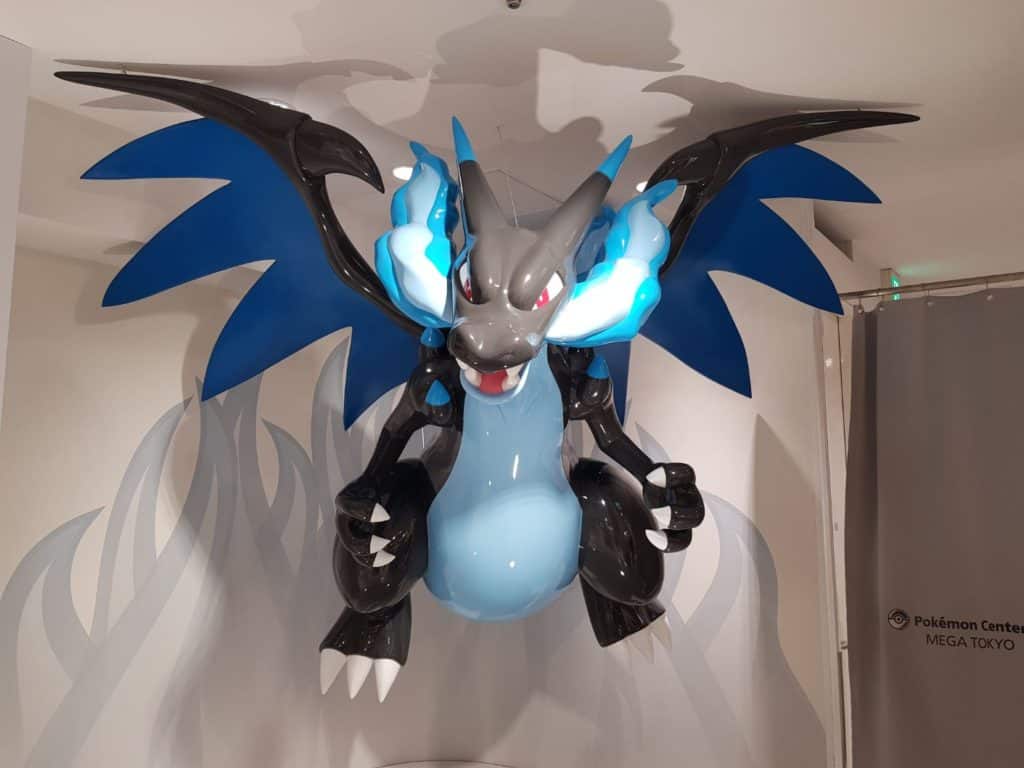 Pokémon Centers have a huge selection of plush and all sorts of miscellaneous stuff. They also do some cool limited-time themed lines of merch, like the Team Yell stuff they put out where they sold a real-life Marnie cheering towel.

Honestly, there’s not too much to say about Pokémon Centers, it’s just a really cool store, really well put together and a must-visit if you’re in Japan. 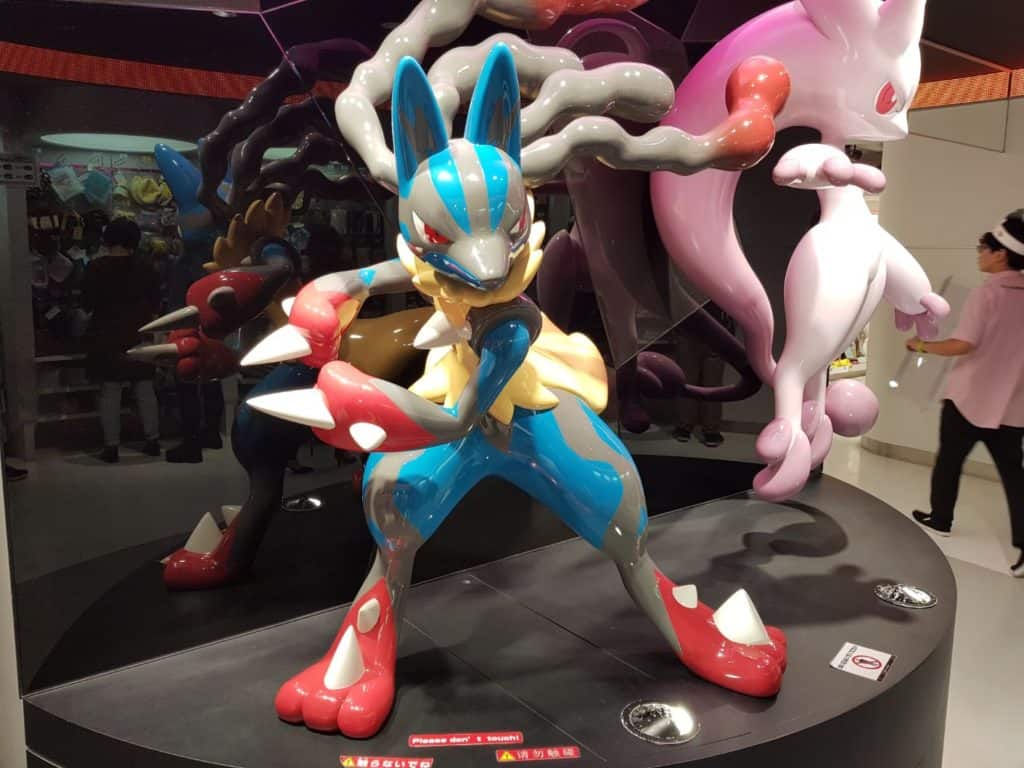 If you don’t get a chance though, there are also smaller Pokémon Stores at Japan’s major airports that share some of the same items, though far from everything.

Make sure you’re in the right terminal!

You can find here the list of all Pokemon Centers in Japan.

While the peak of Pokémon GO has quieted down since its initial release and mobs are no longer marching in the streets, fighting in gang wars, and doing Pokémon GO drive-bys to catch a bellsprout, Pokémon GO is still going strong in Ikebukuro, Tokyo, where a brand new GO themed store has just opened. 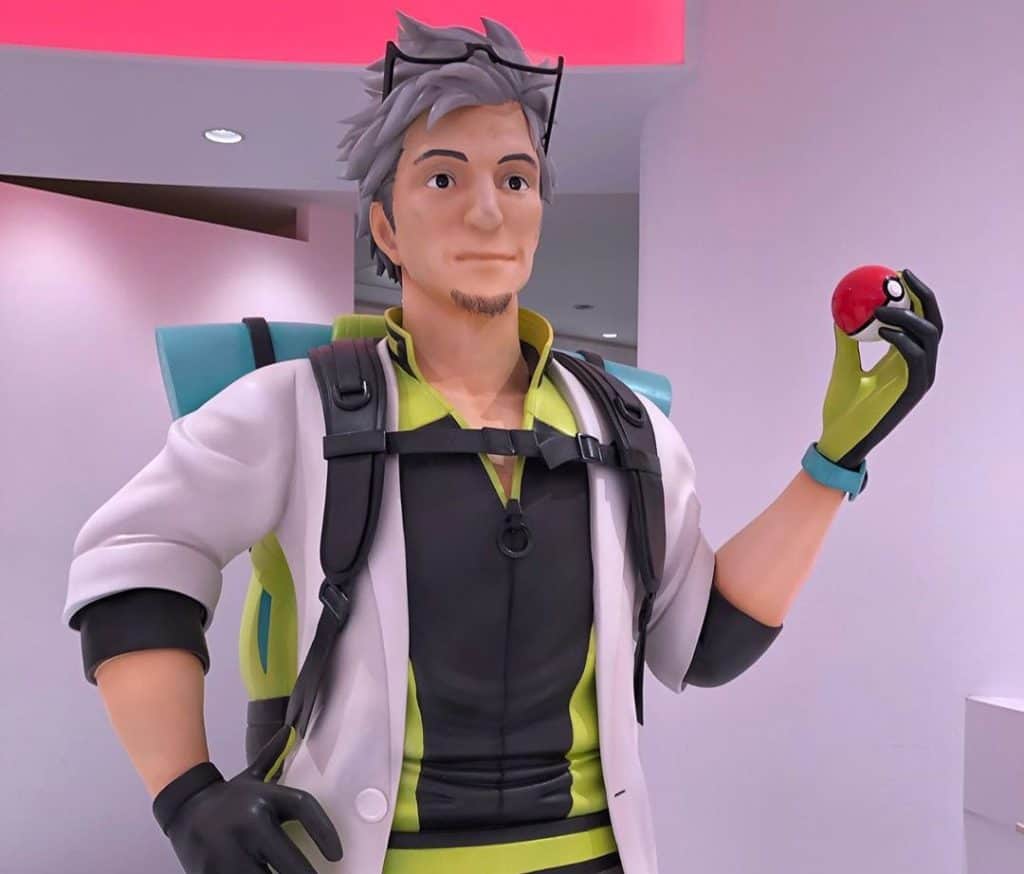 In the same mall as Mega Pokémon Center and Pikachu Sweets, Sunshine City is getting a real overhaul with a store dedicated solely to Pokémon GO. Carrying cases shaped like egg incubators, chocolate coins that look like the in-game coins, and team merch so you know who your allies are and who you need to beat up,

You’ll find a trading board where you write what pokémon you’re looking for and you can trade with people hanging around the store. There’s even a battle space for PvP complete with lines on the floor that makes it look like a very mini pokémon battle arena.

The best part, as a gym located in the game, the store’s lights change color according to which team is in control of it. Mow down your opponents in your cyber turf war and lights flood the room red. This is the bad timeline. This is the cyberpunk dystopia you chose.

After taking the culinary world by storm, Pikachu is expanding into the sweets and pastry business. Bakin’ n’ brewin’ a large selection of taking out Pokémon sweets, Pikachu Sweets is perfect for the on-the-go lifestyle of pokémon trainers and tourists alike.

The menu among other cute offerings includes Pikachu cupcakes, baumkuchen roll cakes, and lattes adorned with none other than the boss man himself, Pikachu. 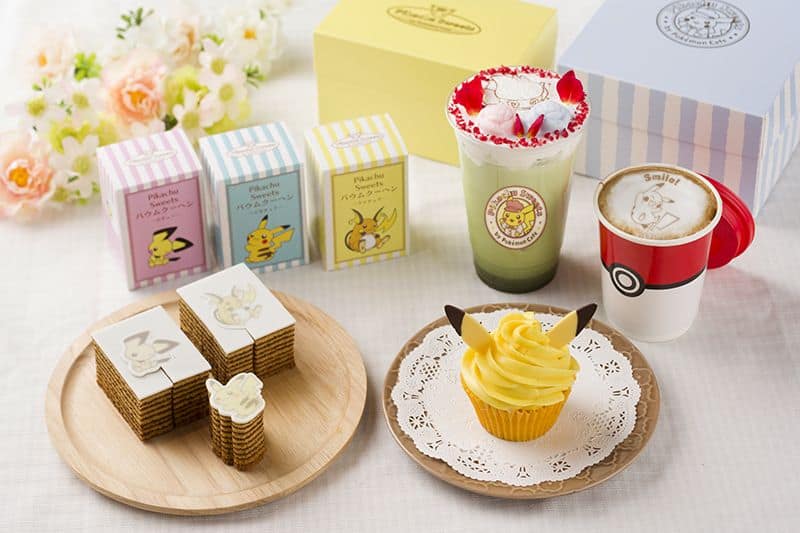 It’s in the same building as the Mega Pokémon Center at Sunshine City mall in Ikebukuro, home to Otome Road and year-round cosplay events which we cover in-depth in our Otome Road article.

I also put the Ikebukuro area on our 1-day otaku itinerary, where you can find a list of anime stuff near Sunshine City and Pikachu Sweets.

Japan’s first permanent Pokémon café opened its doors just recently in 2019! Dine like a champion god-king and be greeted by your chef, Pikachu, who walks around the restaurant to greet the customers and even puts on a dance show along with his lowly Eevee prep cooks.

Check our article all about the Pokémon Café with info on what to expect and how to reserve a table. 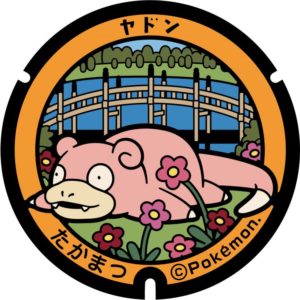 Pokémon themed manhole covers are appearing across Japan! According to the Poké Lids website, these holes may not even be man-made, but may in fact be holes dug by Digletts. 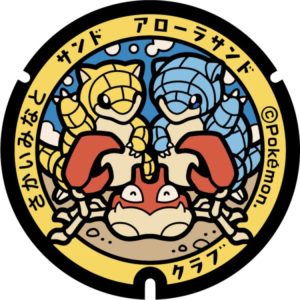 The official website allows you to track down each one on Google Maps and even lists a whole catalog of merch based just on the manhole covers! 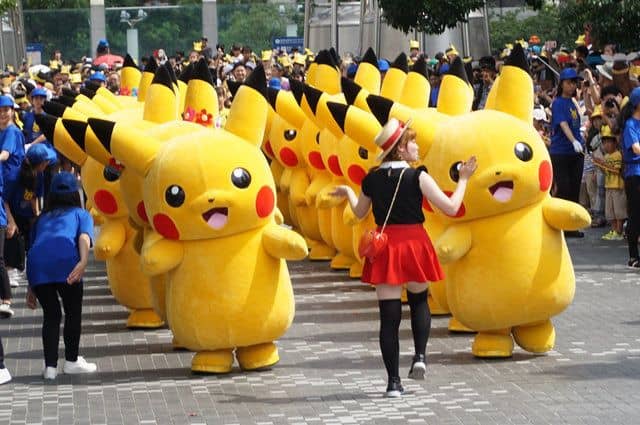 At a yearly event in Yokohama called the “Outbreak of Pikachus”: 2000 Pikachus take over the city in a massive Pikachu parade. It’s really a sight to behold, and we have a full article up all about it! The number gets bigger every year, can they really top 2k? Madness! 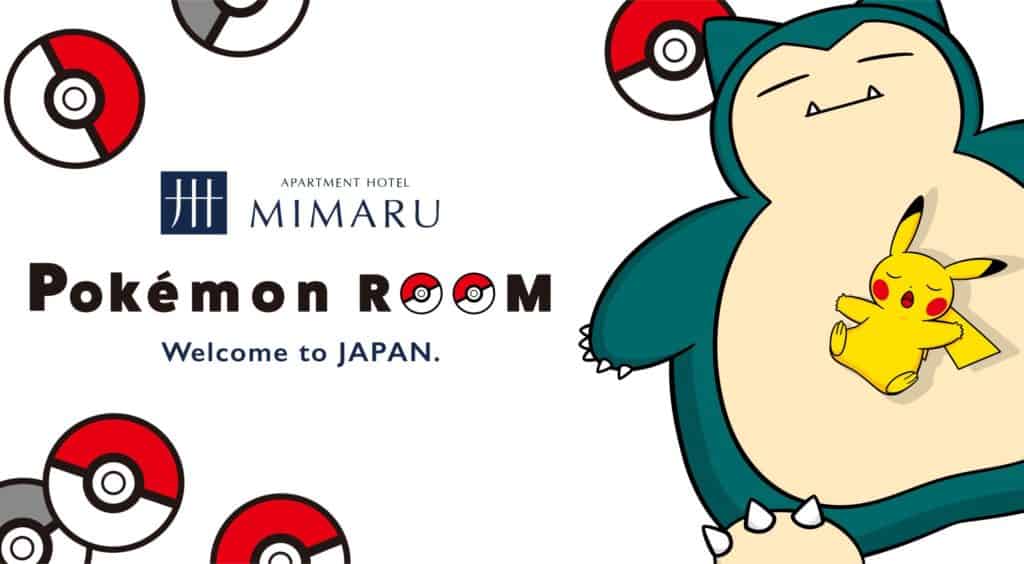 Mimaru Hotels is now booking Pokémon themed rooms in Tokyo and Kyoto, where with a giant Snorlax plush right on the bed, you’ll only have the sweetest of dreams. 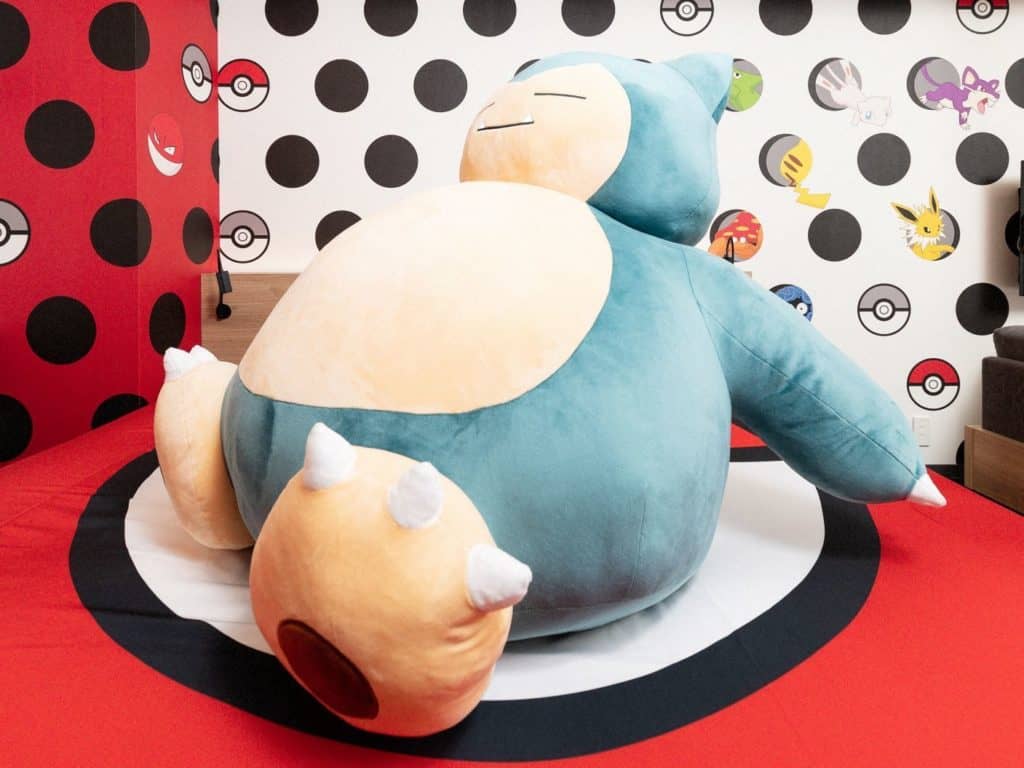 Maybe not the most intricate themed hotel room you could find in Tokyo, but hey you’ve got to sleep somewhere! 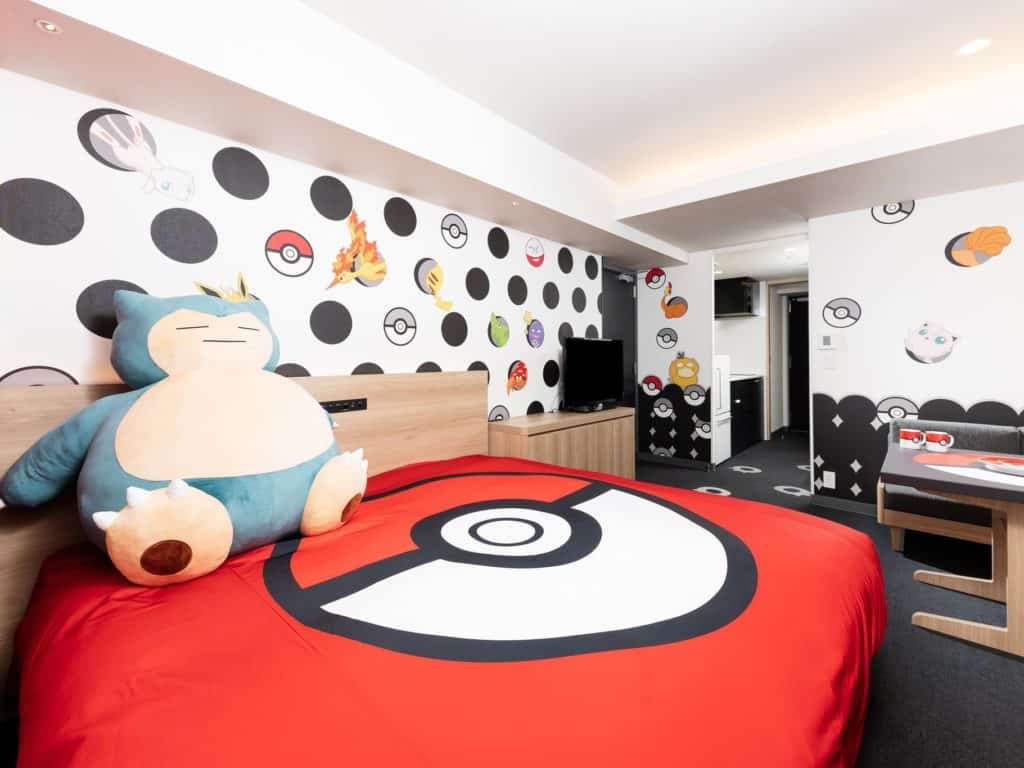 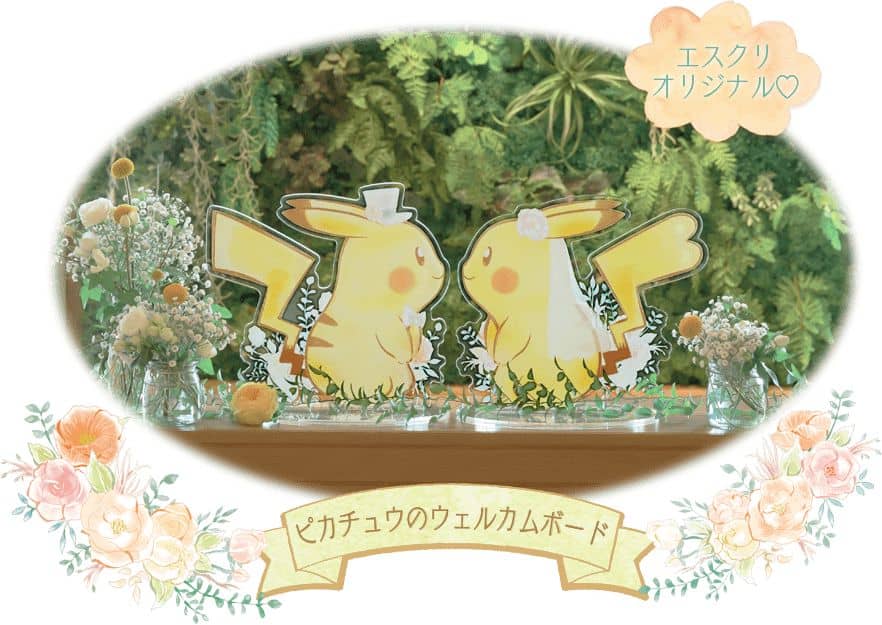 “It was the summer of ’99. The breeze was fine and I didn’t have a care in the world. I was rocking a gold plated Charizard card that I got from my Burger King big kids meal in my Yu-Gi-Oh wallet. The coolest kid on the block. That was the day I met my childhood sweetheart and future wife. It all started with one electric mouse”.

If that sounds at all familiar, this may be just the thing for you. You can now tie the knot with a Pokémon themed wedding, provided by the wedding ceremony company ESCRIT and none other than The Pokémon Company itself. 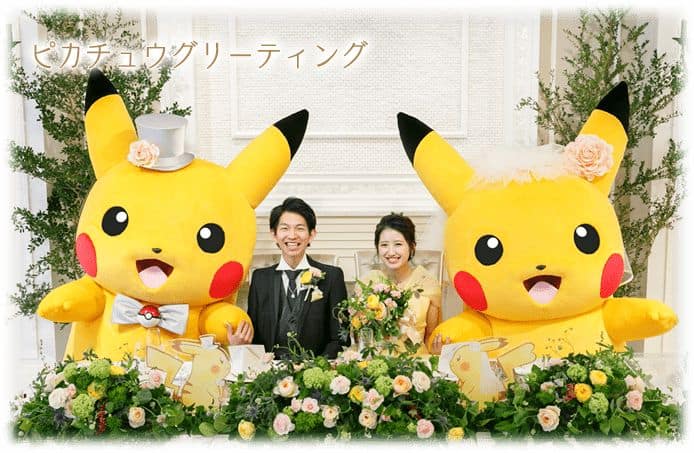 Two Pikachus, just like the ones at the Pikachu Outbreak parade, will stand by the altar dressed for the occasion in wedding garb, and every detail from the catering to the cake, and even the wedding certificate will be officially licensed by the real Pokémon Company. 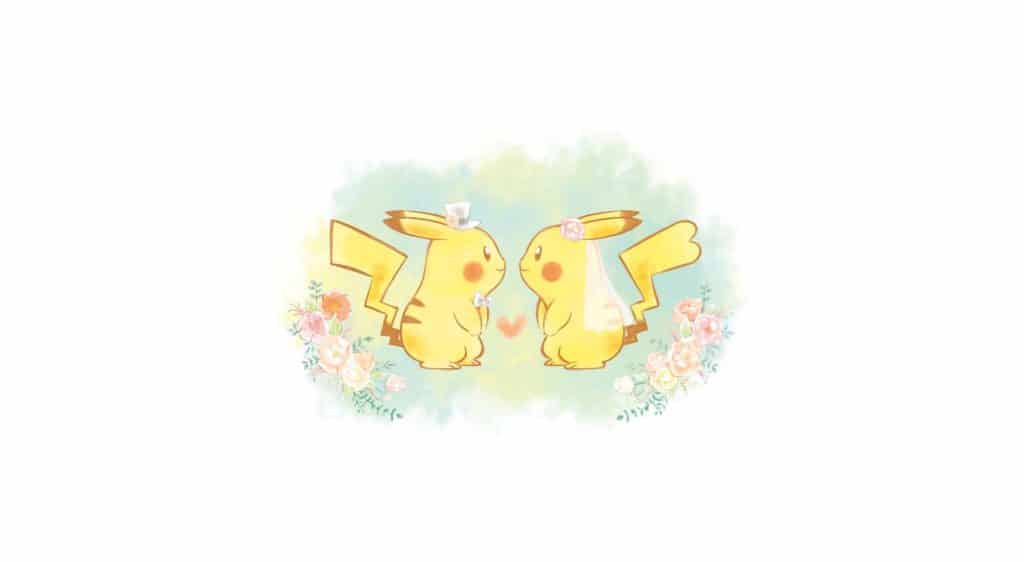 It sounds a bit much at first, but it’s actually a very classy looking ceremony. You can find more photos of what a full Pokémon wedding looks like on the official website.

The first four regions in Pokémon are geographically based on real regions of Japan. With Kanto sharing the same name as the actual Kanto region of Japan, Johto is parts of Chubu and Shikoku, as well as its main counterpart, the Kansai region where Kyoto is.

Ecruteak City in Pokémon is an old Japanese style city. The two pagoda towers in Ecruteak, the Tin Tower (or Bell Tower in the remakes) and the Burned Tower are likely based on two sets of towers and temples in Kyoto.

The largest influence comes from Kinkaku-ji (Temple of the Gold Pavilion). It’s a golden temple in Kyoto that was set on fire in 1950 by a novice monk. Rebuilt, it stands with a statue of a bronze phoenix (Ho-oh in Japanese) at the top of the building. With Kinkaku-ji as the Burned Tower, the Ginkaku-ji (Temple of the Silver Pavilion) is the real-life counterpart of the Tin/Bell Tower.

It might seem a bit weird that you fight Ho-oh on the Ginkaku-ji, aka the silver tower, but it’s the same as in the games. The Tin Tower shines silver, and the Burned Tower with its lesser-known name as the Brass Tower was formerly colored gold. 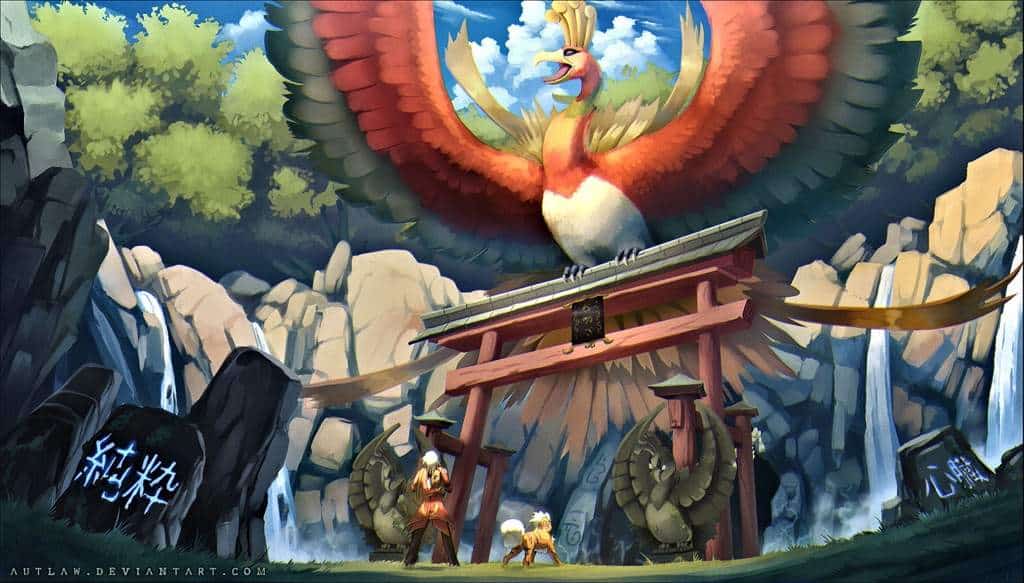 As neither of these temples are large pagodas like the towers in the games, it’s speculated that they’re a mix of the gold and silver temples, and the largest pagodas in Japan, Kyoto’s To-ji (East Temple) and its burned down twin, the Sai-ji (West Temple). 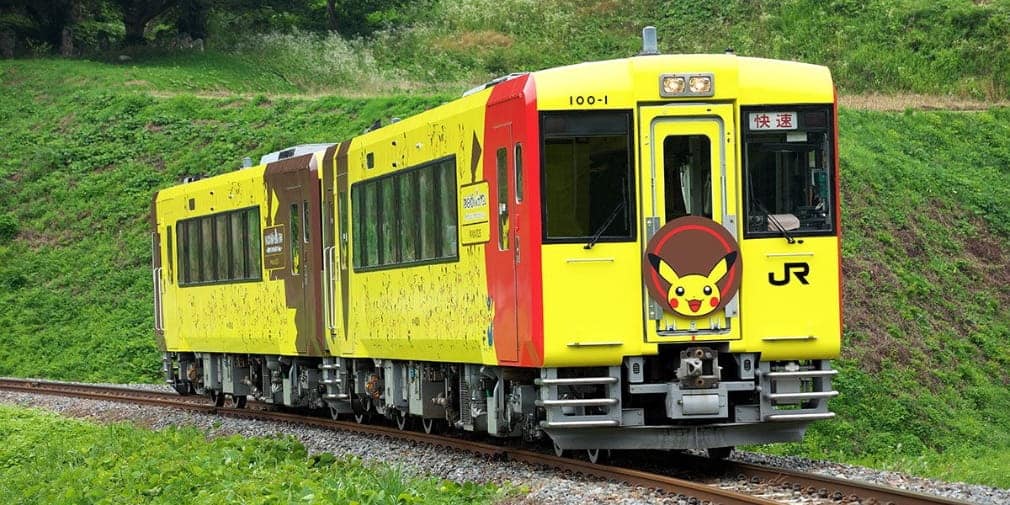 Yes, there is a Pokémon themed train in Japan! “POKÉMON with YOU Train” is a wonderful experience. 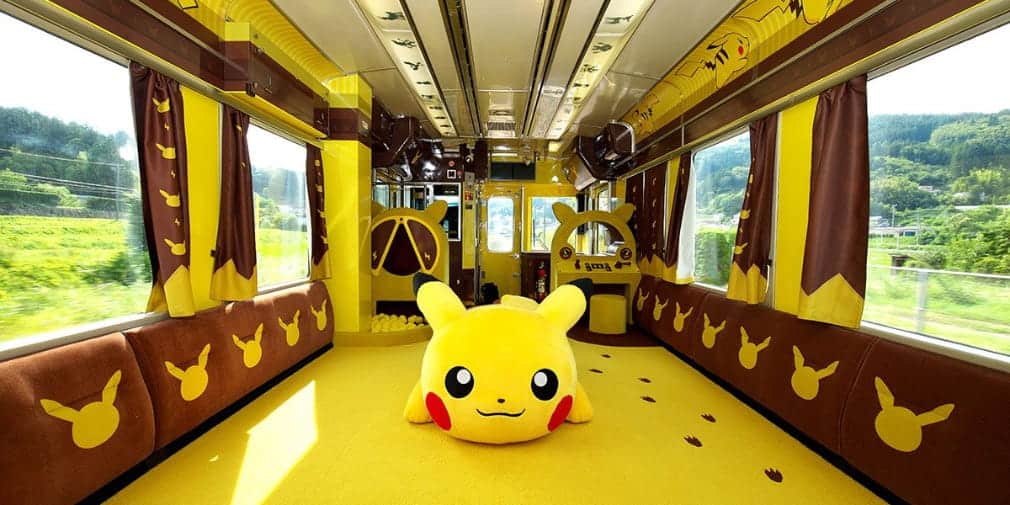 For more information and reservations check out this and this website.

Where to buy retro Pokémon games?

Looking for Japanese versions of old Pokémon games? You can find them at several stores all over Japan like Super Potato, Surugaya (only at the ones specializing in games), and many others. Of course, you’ll run into many of these stores at Akihabara in Tokyo or Nipponbashi in Osaka.

A good thing about retro games in Japan is that they’re often much lower-priced than their US counterparts. You should be able to find boxed or loose versions of these games for a very fair price.

Pokémon is alive and kicking in Japan and you’ll have more than enough opportunities to run into Pikachu and his cronies during your travels.

From special events hosting entire legions of Pikachu to the old faithful Pokémon Center stores, going to all of them will be a journey in itself. Just don’t catch any wild animals.