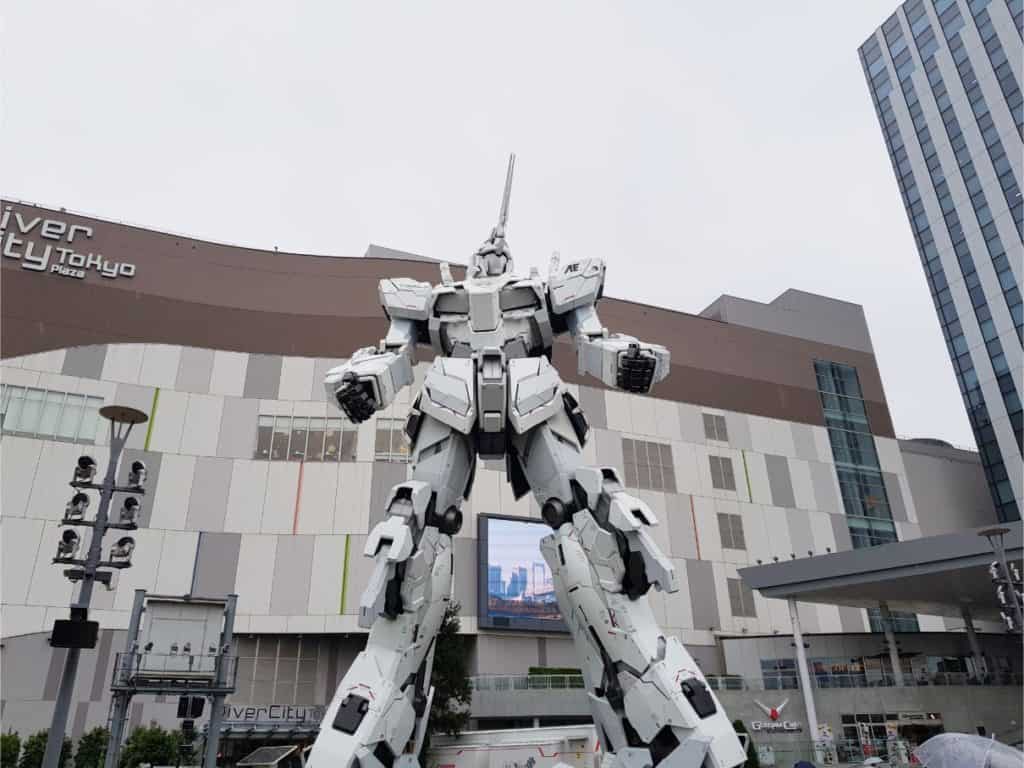 Are you looking for anime-related attractions and locations for your visit in Odaiba?

This article will be your guide to all the anime attractions that you can’t miss in Odaiba. 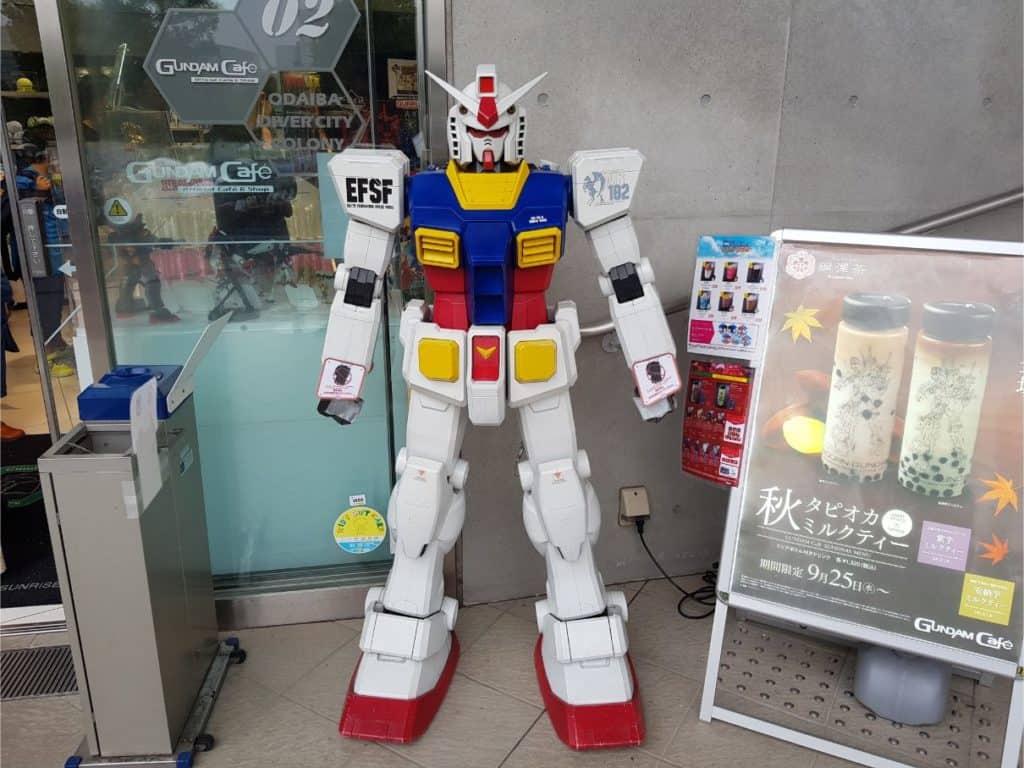 Odaiba is a large artificial island just on the southeast side of Tokyo, redeveloped in the ’90s as an example of futuristic living.

Together with Akihabara and Ikebukuro, Odaiba is one of the best places to find spots for anime sightseeing.

When it comes to anime, Odaiba is often just known as the Gundam’s stomping grounds but there are many other anime attractions to see as well.

Let’s dive into the future and see what’s happening on Tokyo’s city at sea. 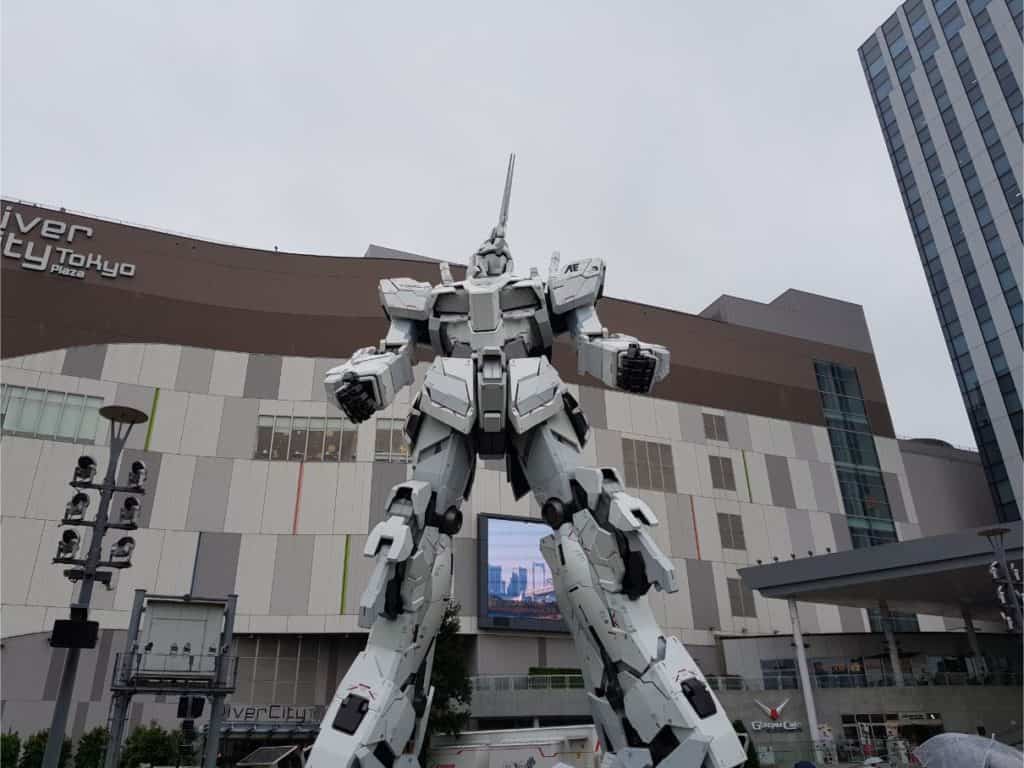 This is essentially a dream come true for mecha fans, you can see Banagher’s big boy in person. Full scale with moving parts, view it at night to see it transform into Destroy Mode in a sound and light show. 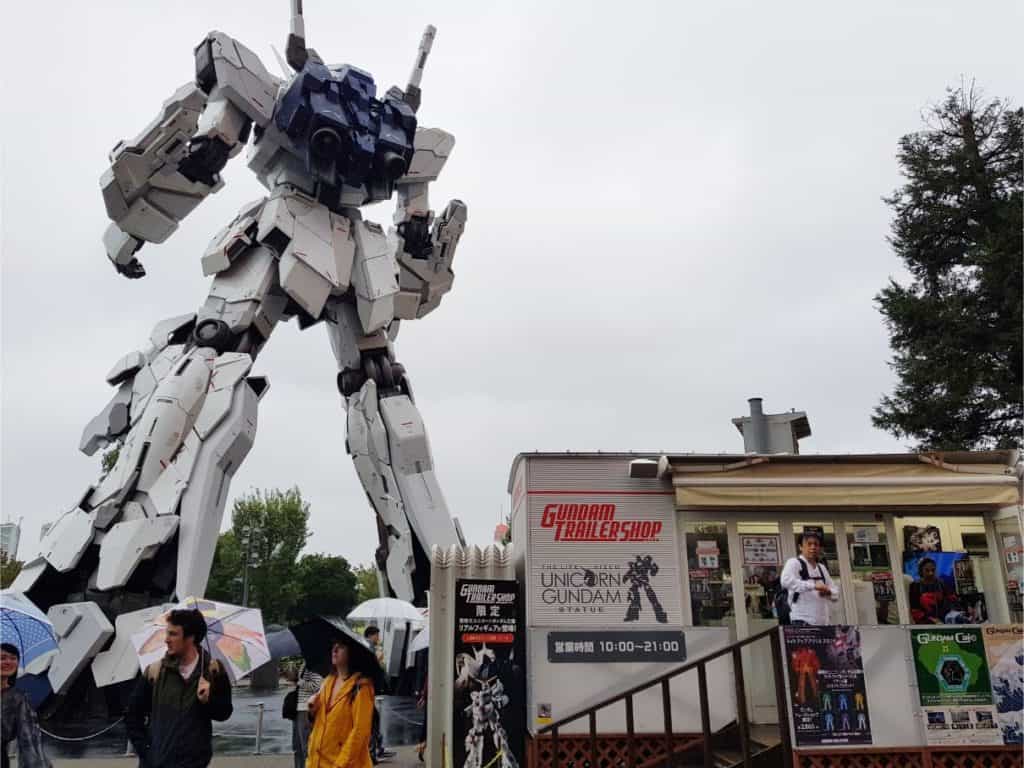 It has some big shoes to fill, standing where the old RX-78-2 Gundam stood until it was retired just a few years ago, but man is it a sight to behold. Here’s my hope for the next one. 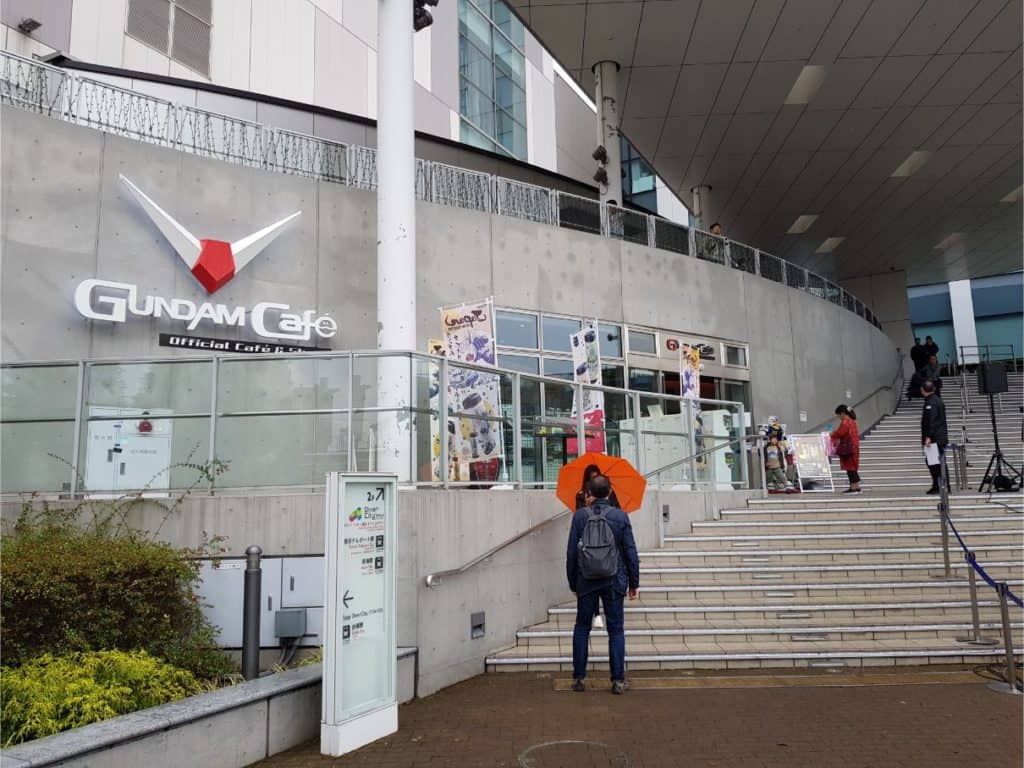 Just behind the Unicorn is a mini Gundam Café and shop. While they don’t have the full offerings like at their store in Akihabara, you can get the iconic 1/144 scale Gundam pastries (no assembly required, use your teeth as nippers) and a nice selection of drinks. 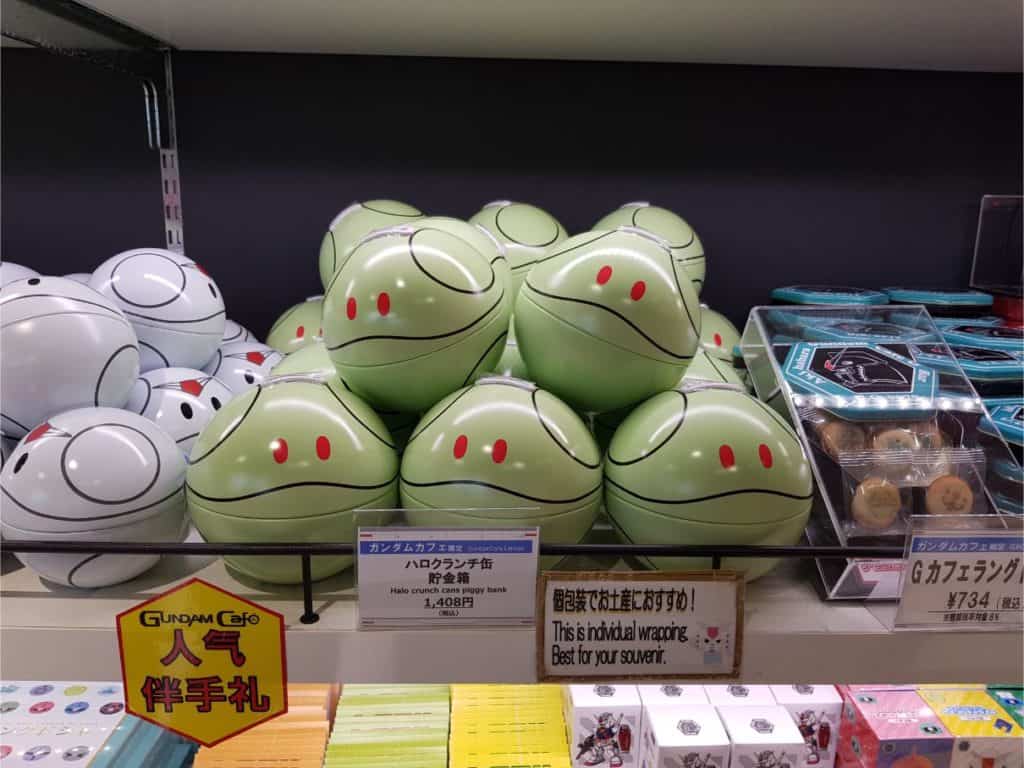 The Gundam Café shop is very cute and has items ranging from genuine Jaburo coffee to beam saber umbrellas.

The Gundam Base is a huge store, exhibit, and event space where you can see how Gunpla model kits are made, watch live builds and event streams in person. You also get the chance to see the winning builds of past Gunpla Builders World Cups on display. 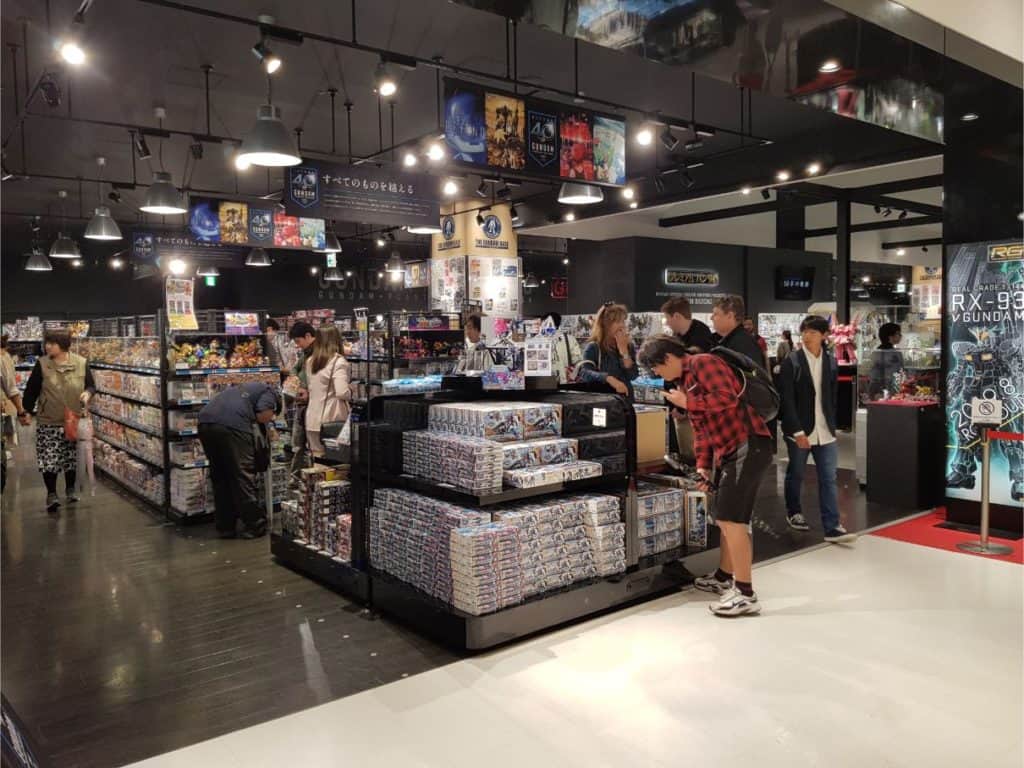 Gundam Base mostly focuses on the Gunpla/model kit side of Gundam, with a ton, just a ton for sale. From Gunpla old and new, it’s all here.

That said, the Gundam base mostly focuses on the model kit aspect of Gundam, unlike its pre-renovation predecessor, the Gundam Front, which had things like rare art from the older Universal Century shows, more full-scale stuff from the series, and battle dioramas inside.

It’s more geared towards fans of modern Gundam and has become more of a really cool looking store than an exhibit, but there’s still lots to see, with rotating displays of things, like real animation drawings from the series and a high end Gundam merch store that’s worth checking out too.

Shingeki No Kyojin & Ghost In The Shell VR Games 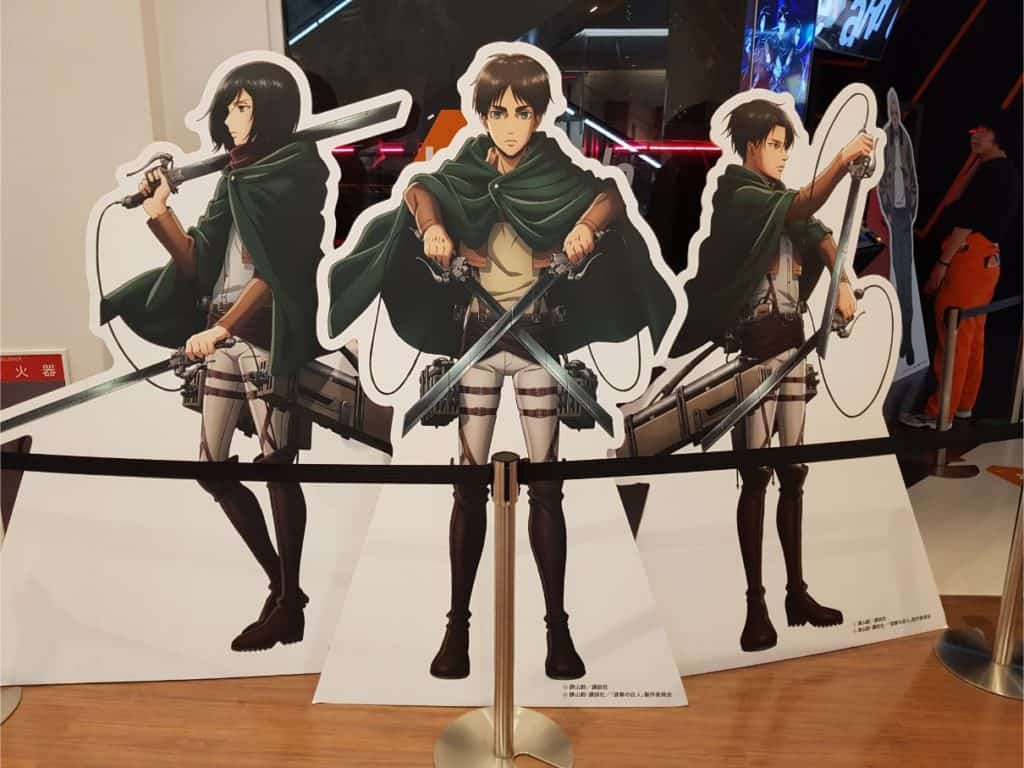 Odaiba wouldn’t be the “City of the Future” without some VR would it?

At DiverCity (the mall right behind the Gundam), you can find hexaRide, an immersive 360-degree VR experience where you can live the story of volumes 9 and 10 of the Attack on Titan manga firsthand.

In the Ghost in the Shell ride, you help the major as a member of Public Security Section 9 as you escort the defense minister and defend him from cyber punks and crypto-criminals. 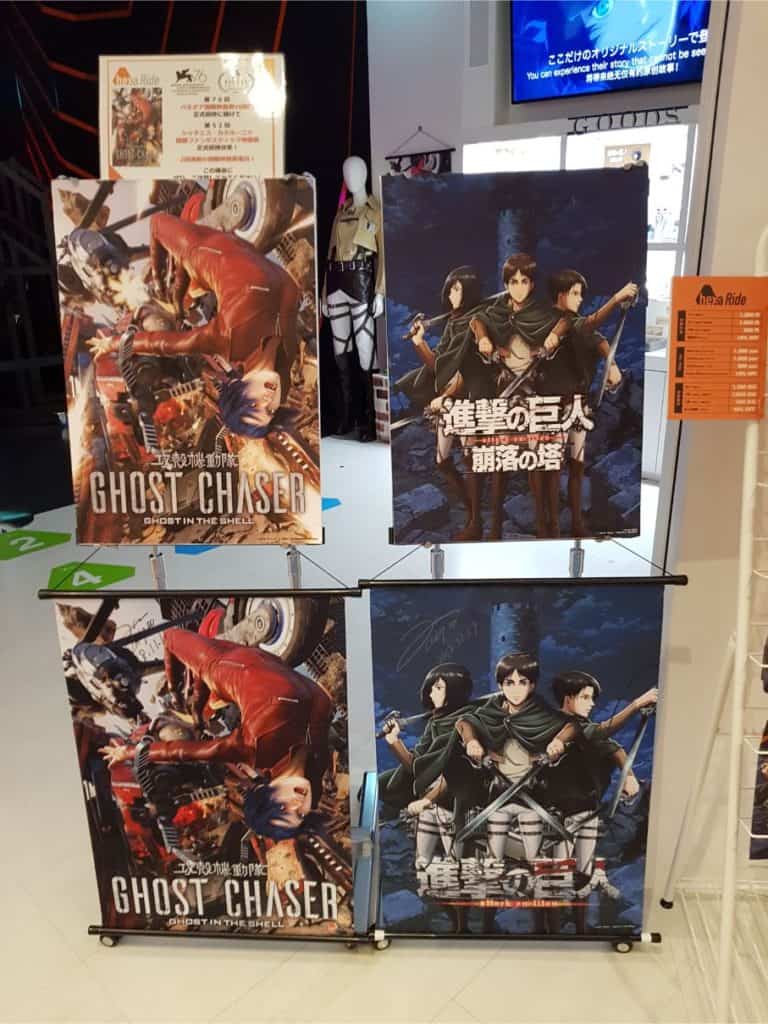 Many anime take place in Odaiba. Here’s a list of some of the most famous ones. 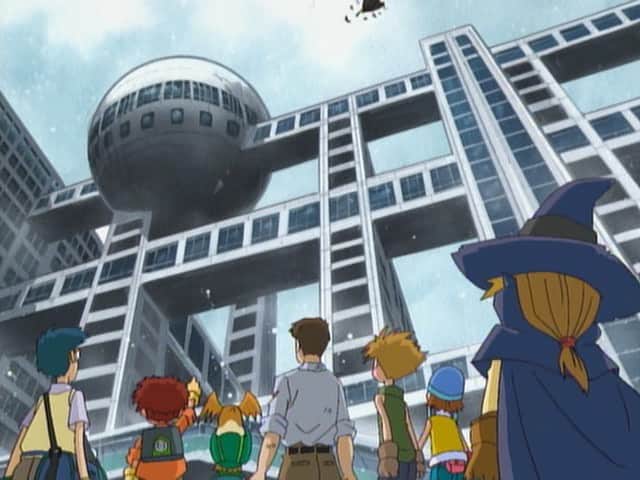 In the show, the characters in Digimon go off to summer camp, only to be transported to the digital world, The day the Digi-Destined meet, August 1st, is famously called Odaiba Day.

Yamato and Takeru’s dads even work at the famous Fuji TV building. They fight Venom Vamdemon on top of this building, as well as around the Tokyo Bay. The fight against Armagemon takes place around the Rainbow Bridge that connects Odaiba and the rest of mainland Tokyo.

Hodaka and the Weather Girl did something here (won’t give you spoilers). 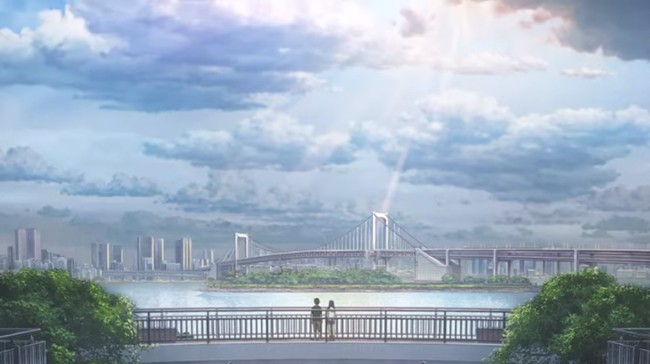 For more anime real locations of Weathering With You, don’t forget to check out this post below:

Weathering With You: 15 Real Life Locations in Tokyo

Another attraction in DiverCity is the Kinnikuman Kin29Shop! Also known as Ultimate Muscle, the classic over-the-top wrestling series has its own store! 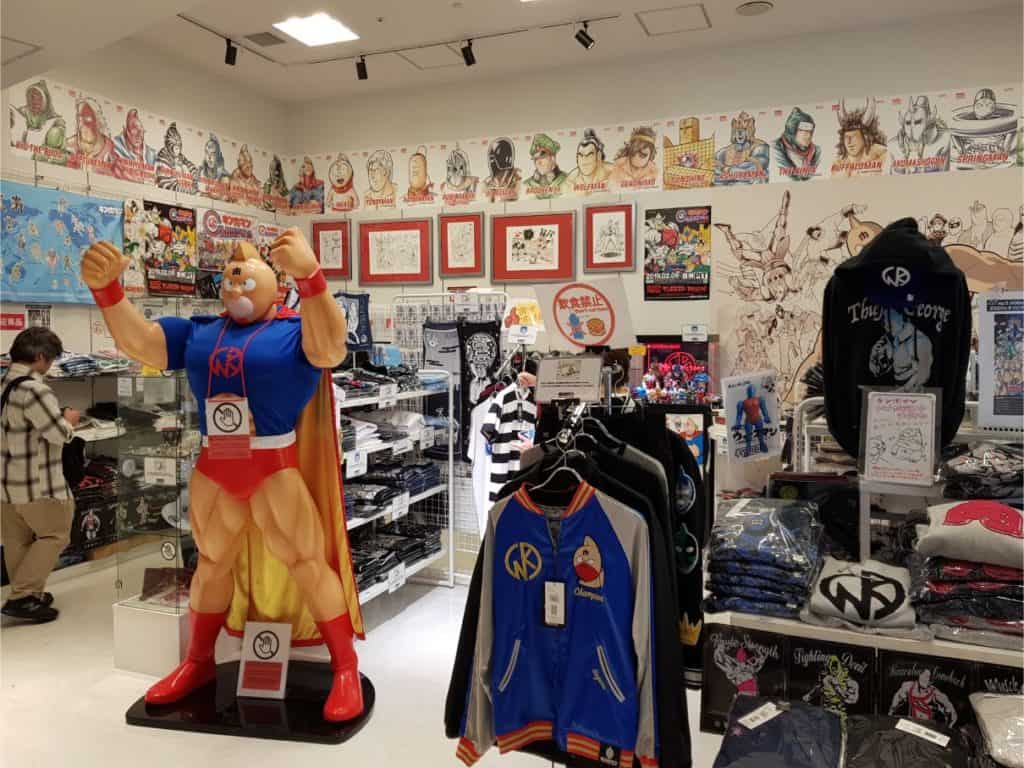 Art from the series lines the walls and there’s tons of merch for fans! 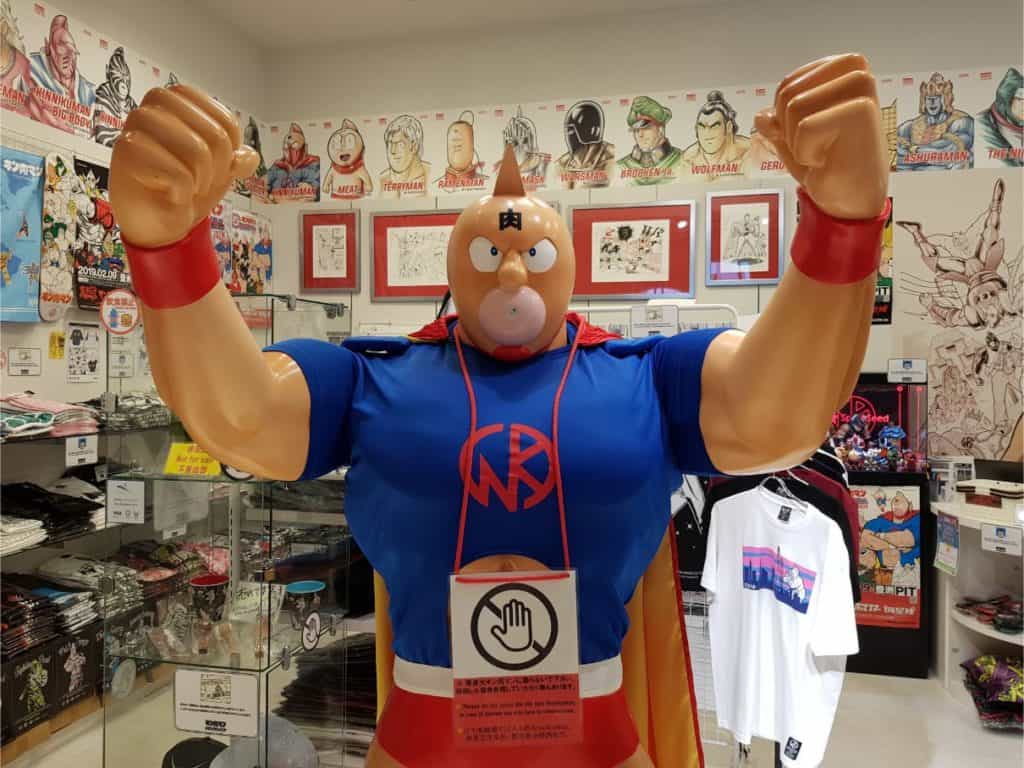 You can find everything from t-shirts to boxers, figures to posters, so it’s a must if you want a slice of Kinnikuman history right in the middle of hyper-modern Odaiba. 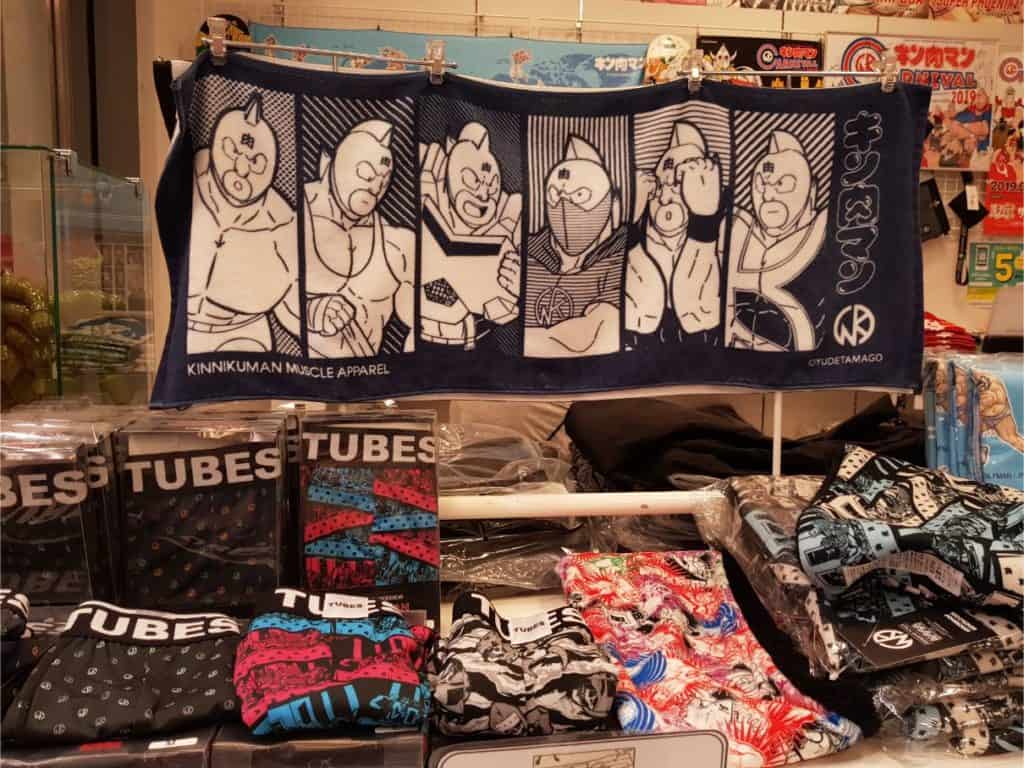 DiverCity is home to a JUMP Shop, a store dedicated to all things Shonen Jump. It has tons of merch and goods from across many Jump series.

For more info, we have an article up all about JUMP Shop.

Note: The store will be open for a limited time until February. 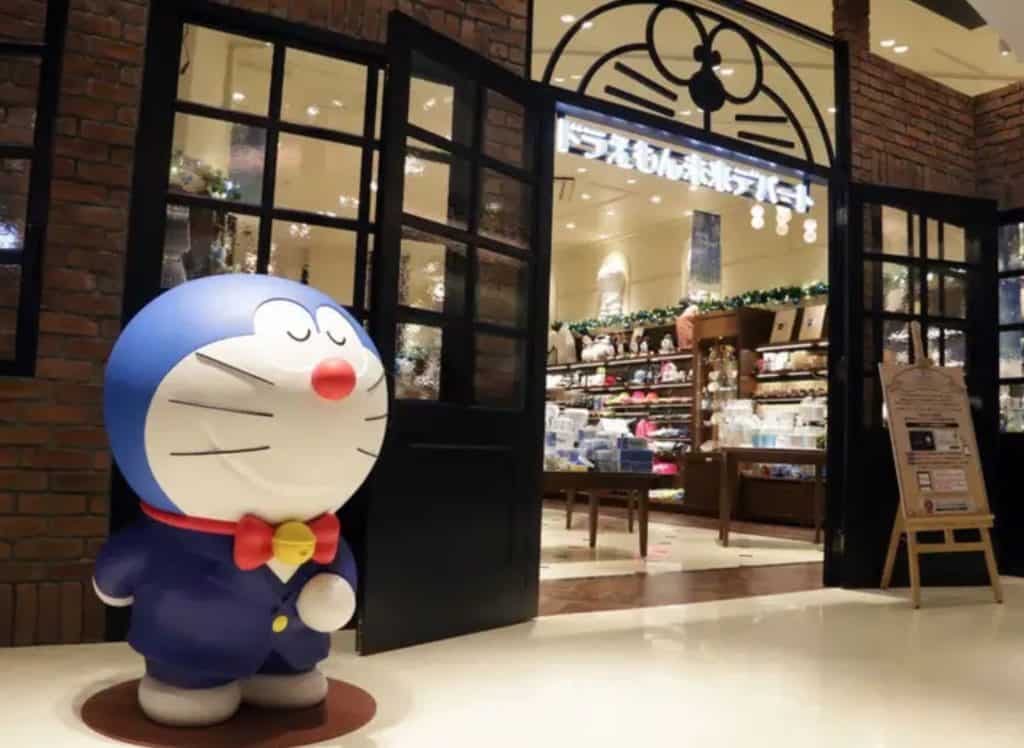 New to DiverCity is the Doraemon Store! Celebrating 40 years of Doraemon, the robot cat from the future is opening up shop in the appropriate location of Odaiba. The store has everything you’d expect from a themed anime store, with apparel, figures, collectibles, and all sorts of weird and cute merch.

Doraemon’s store opened recently on December 1, 2019, so pay the cat a visit.

A cool and unique shop for a sick programming block. The Noitamina shop, “Animation” spelled backwards, is a nighttime programming block on the Fuji TV channel dedicated to less run-of-the-mill anime, aiming to expand the audience of anime.

It can be found in the Fuji TV building, all within scenic walking distance of DiverCity and the Gundam statue.

Other Non-anime attractions that are worth visiting:

How do I get there?

Taking a train from central Tokyo will generally require two trains (a line transfer). You can transfer off the Yamanote Line that runs in a circle all around Tokyo, onto the Rinkai Line to get to places like DiverCity and its surroundings, where most of the locations shown in this article are. 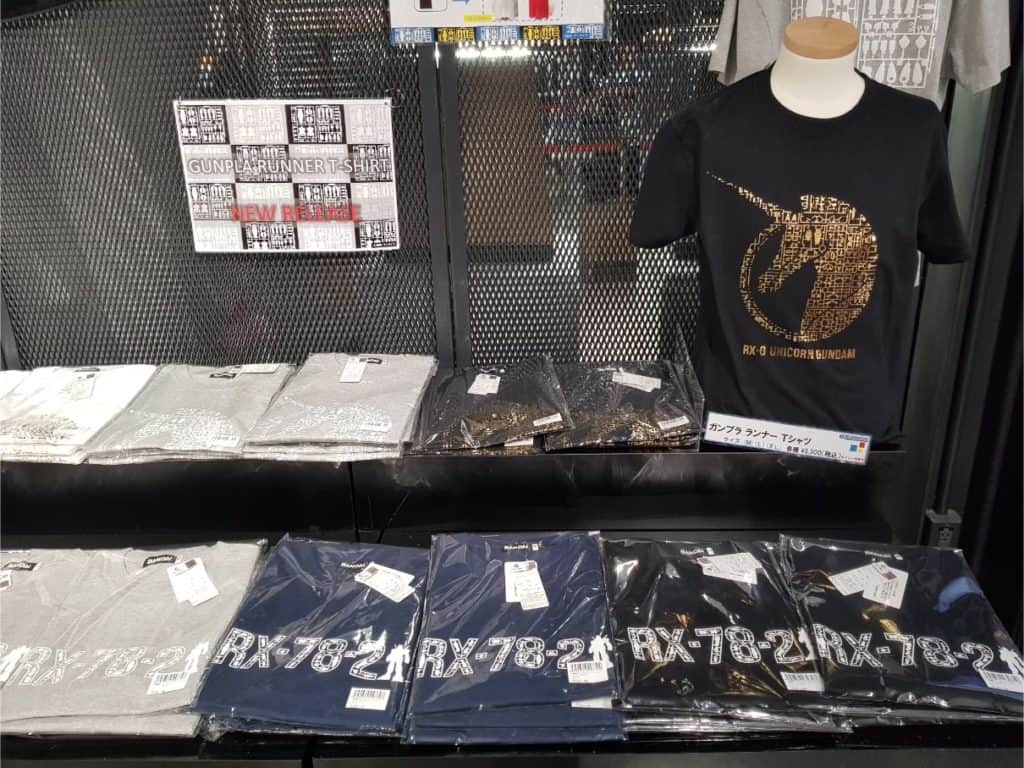 Is it worth visiting it?

Odaiba is one of my personal favorite places in Tokyo and one of the most unique places you can visit there.

Tokyo has all sorts of faces to it but if you want the furthest extreme, of its sterile, high tech, glossy white plastic covered futuristic side, this is the place to go. If you’re thinking, “should I skip Odaiba?  It’s all the way out in Tokyo bay”, the train ride out is more than worth the effort. 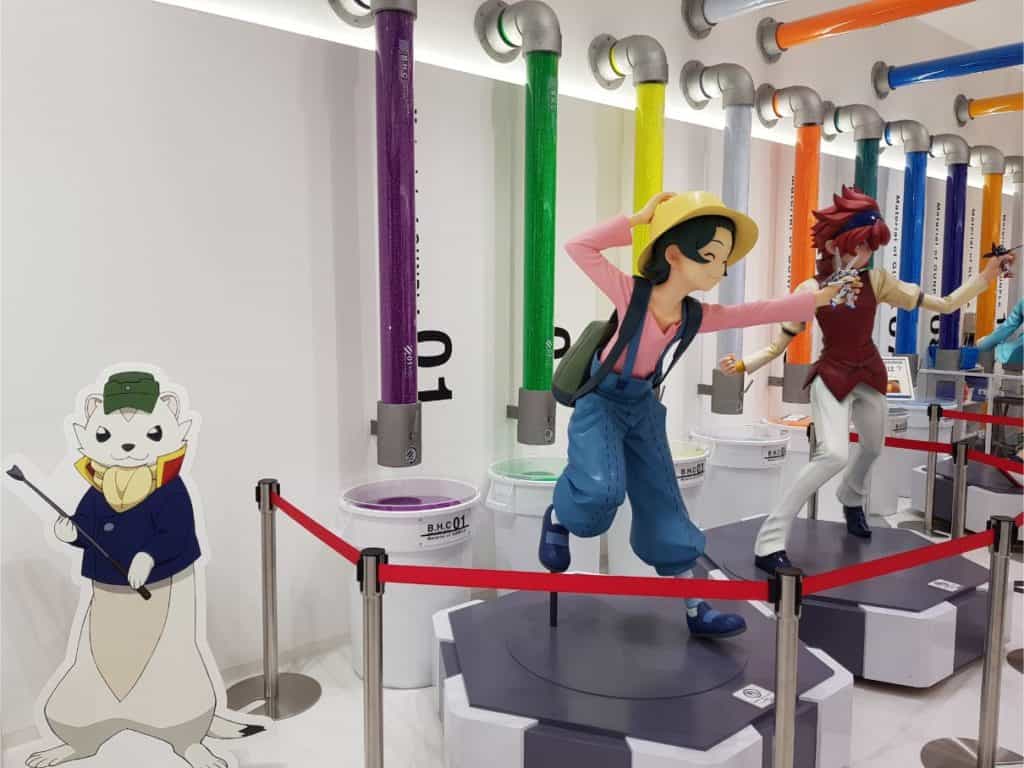 With lots of anime attractions and plenty of indoor and outdoor things to do, it’s a great place to spend a day away from the bustle of central Tokyo.