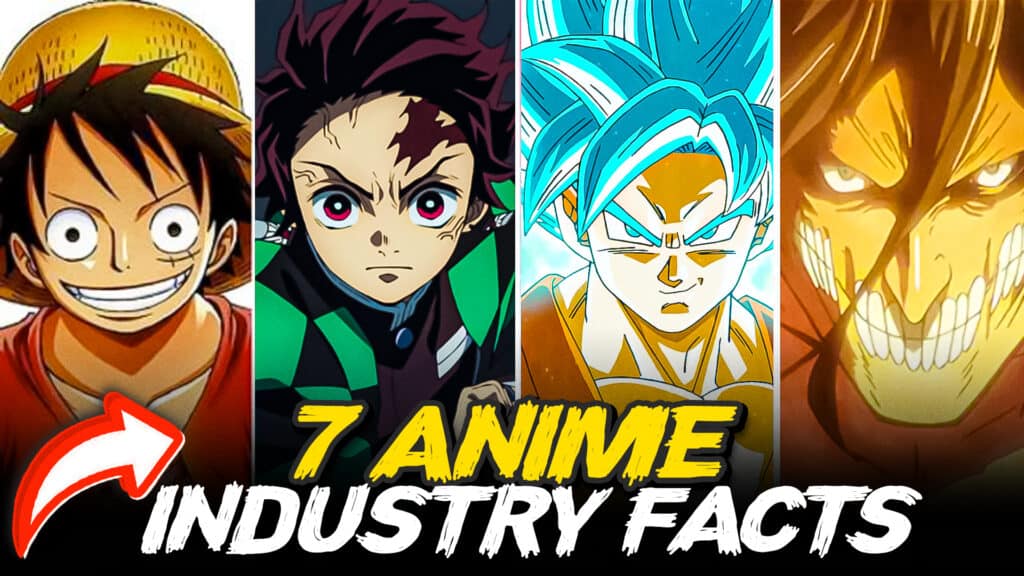 As of March 2022, the total market size of the anime industry is worth around 2.4 trillion yen, which is more than 21 billion USD. However, according to the latest report, the industry also shrank for the first time in 10 years.

Does that mean the end of the “anime bubble”? Or are people just exaggerating, and we’re actually living in the golden era of anime?

I’m going to tell you 7 facts about the anime industry that’ll blow your mind. And, if you watch until the end of the video, I’ll tell you how much money people in the industry make.

Or, read the transcript here:

5 of the 10 highest-grossing movies in Japan are anime movies, including the top two: Kimetsu No Yaiba and Spirited Away.

Anime movies are making so much money, they should have a good budget, right? Well, it’s probably not what you think.

Have you ever heard of “the curse of Tezuka”?

Osamu Tezuka, best known as the creator of Astro Boy, is said to have sold his series to networks for what would be roughly US$2,000-3,000 per episode. Basically, he sold it for pennies and many people blame this as the reason why even nowadays animators are not being paid enough and there is not enough budget for anime-related content.

Even though Japanese anime movies make a lot of money in Japan, the average budget is merely 3-5 million USD. For example, the budget for Your Name, the fifth highest-grossing movie at the Japanese box office, was roughly 4 million USD.

The film has now grossed $358 million worldwide. $4 million USD of budget to make an animated movie in Japan is nothing compared to the 150 million USD that Disney spent on making Bolt.

Does that mean that the demand for anime is decreasing?

Before I continue, I have a question for you: How much anime do you think are produced each year? Try to guess.

Yes, there was an increase of almost 100 anime produced per year in the last decade, but there is a concern in the past years about the production of anime. Let me explain to you:

Is it due to a loss in demand for anime?

In 2019, the decrease in production was likely caused by a decrease in sales in the Chinese market, on top of the postponement of TV broadcasts in Japan.

In 2020, due to COVID-19, productions were temporarily suspended and/or had their broadcasts delayed.

But that doesn’t mean that the demand for anime productions is decreasing. In fact, it’s still huge. For example, KADOKAWA, the publisher that owns most of the isekai titles like Re:Zero, Mushoku Tensei, and others, mentioned that they aimed to increase the number of anime they help produce going from 33 titles in 2020 to over 40 in 2021.

I’ll explain in a bit more detail why the demand for anime is greater than ever.

The most dramatic news about the anime industry is that the global anime market, which was seeing constant growth for the past 10 years, contracted compared to the previous year for the first time in 11 years. The market size in 2020 was 2.4 trillion yen, a 3.5% decrease compared to 2019.

As you can see in this graph, the anime industry was enjoying growth for the past 10 years. But, in 2020, it shrank 3.5% compared to the previous year. The total market profit of the industry decreased, and as I mentioned before, fewer anime studios were created, and the number of anime produced per year decreased. Does this mean that the anime industry is not going well?

Keep watching because I’ll answer your question in a bit.

Next fact. Yes, the total market profit of the industry decreased. But the overall anime market outside Japan experienced a growth of 3.2% to reach 1.2 trillion yen. In 2020, the overseas market size surpassed the domestic market for the very first time. Since 2012, the global anime market has been experiencing sharp growth and finally, in 2020 it surpassed the Japanese market.

The overseas market experienced a growth of 103.5% in the past 8 years, Incredible, right? I hope that Japanese companies pay even more attention to the people living overseas.

And, my next fact will explain this further.

Netflix reported that the number of households worldwide watching at least one anime title from January to September 2020 grew by 50% to more than 100 million. Anime is represented in Netflix’s top titles in over 100 countries.

Also, Crunchyroll was launched in 2006 and it took about 10 years to hit one million subscribers

As you can see, the anime industry market shrank a bit in 2020 due to the anime productions being temporarily suspended, but the overseas market grew and now it’s bigger than the domestic market. Crunchyroll & Netflix experienced huge growth. Funimation launched in Latin America. Anime Onegai, which is a joint venture between Shueisha, My Theater, Toei Animation, and TV Tokyo was released in Mexico, and more anime movies are being released outside Japan.

After considering all of this, do you think that the anime industry is not doing well? Is this the end of the anime bubble? Or are we experiencing the golden age of anime? Let me know in the comments below!

For example, as a new grad or someone without experience, if you want to work at Aniplex, who produced Kimetsu No Yaiba, Fate/Zero, and others, is around 2,000 USD (228,000 yen) per month in the role of assistant in the animation planning and production department, which for a new grad in Tokyo is an average salary.

And how about animators or manga authors? How much money do they make? Well, this is where things get interesting.

Kirstie interviewed one of the animators for Jujutsu Kaisen and Kimetsu No Yaiba, and she asked how much an animator typically makes in Japan. And we also have a video explaining how much money a manga artist makes in Japan.

We’re planning to post more videos about the anime industry, so make sure to subscribe and click the bell so you don’t miss it, and I’ll see you in the next video!