HOW and WHERE To PUBLISH Your Own MANGA? 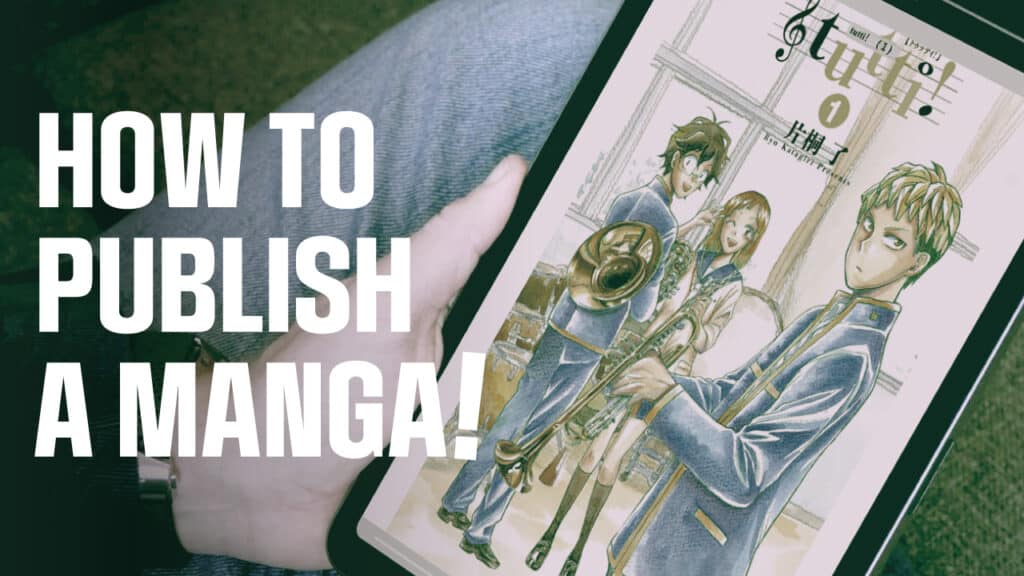 “How does a manga artist normally get paid? ”

“What are the biggest challenges manga artists have faced since gaining serialization?”

Let me tell you that we interviewed Ryo Katagiri, a professional manga creator in Japan and we ask her how to publish a manga, etc.

Or if you prefer to read, here is the transcript of the interview:

But before we get to the interview, you need to know that this article contains affiliate links. If you click one, we will get a small commission if you make a purchase (at no additional cost to you). This helps us keep the site running so we can keep bringing you the best manga and anime content straight from Japan. And moving on—the interview!

What inspired you to become a manga artist?

I’ve loved drawing, manga, and doodling since I was about 4 years old. My older brother bought a lot of manga, like Dragon Ball, Naruto, and One Piece, and My father worked for a paper company so we had a lot of paper at home. I doodled and read manga every day. So by the time I was five or six, I knew I wanted to be a manga artist.

How did your journey as a professional artist begin?

When I was 12 years old, a friend taught me how to use dip pens, inks, screen tones, etc. We started learning to draw in a more professional way, trying to create real manga together. That’s when I started thinking about applying for manga awards.

I eventually won an award when I was 21 years old. For winning, I got prizes and my manga was published in a magazine for the first time.

How did you pitch your manga to Shogakukan?

When I was 19 years old, I first tried to submit my manga to Shogakukan. I didn’t get very good results at the time, but the next year I submitted my manga for an award. It was the Shogakukan monthly manga award, and I won it and got a prize.

When you pitched, did you send the story, the whole manga, or a one-shot manga?

When submitting a manga, it must be a complete one- shot manga. It can’t be missing any elements. For example, if you send only text or only pictures, they will reject it.

Was there a particular reason for choosing Shogakukan (Weekly Shonen Sunday) to publish your manga, instead of another Japanese manga magazine?

I did also apply for many awards from other magazines. I think I won 5 or 6 awards, including smaller ones.

But I chose Shogakukan because they were the first to publish my manga in their magazine.

Besides pitching directly to publishers, are there any other ways to get your manga published?

As I mentioned in part 1, you can upload your manga and drawings to the Internet or social media platforms, such as Twitter, Pixiv, and Instagram. If you get a lot of attention, you will get messages from editors.

We know being a serialized artist can be stressful, what are the biggest challenges you’ve faced since gaining serialization?

Depending on the situation, either every month or every week we mangaka receive the answers from a questionnaire our readers fill out where they evaluate our manga. That’s how I know if my manga is popular or not. The biggest problem is when I find out that my manga is not popular. It’s very depressing, and I have to think of a solution as soon as possible.

Do the tight timelines ever make you feel burnt out? If yes, how do you regain creative inspiration?

Yes, of course, it happens!

This is very difficult, but I have no choice but to draw even if I have no desire to create. It’s like brushing your teeth, you have to do it every day as a matter of course. But if you are feeling really unmotivated, you can watch movies, read other comics, listen to music, or have a rest to help regain your inspiration.

Manga artists are paid by the page.

Other ways artists make money are through royalties. For example, if you publish a manga book, a tankobon, you will receive royalties from the sales.

What are you working on right now that you’d like our viewers to know about?

I’m actually aiming to have my next series published by both Japanese and foreign publishers, which is an exciting possibility.

I also made an online course showing how to draw manga using an iPad.

In the course, I show drafting, paneling, inking characters, how to draw backgrounds, and use screen tones. I’ve uploaded the whole thing to Skillshare, so anyone who wants to learn to draw manga digitally, or improve their current skills, should check it out there. Just search for the words “Manga” and “iPad” on Skillshare.

Please check it out!

Do you have another artist you look up to?

And of course, many more!

Did you ever see another artist you wanted to model your style after or that influenced your style in any way?

Yes, I have been greatly influenced by Nanae Kurono sensei, of Shinsengumi Imon Peacemaker.

I also like Atsushi Okubo sensei of Soul Eater and would like to use his art as a model for my own.

Remember that this was PART 1 of the Interview, to watch click here:

And if you’re looking to draw awesome manga like Katagiri sensei, you’re going to need the right platform to do it. Clip Studio Paint

is the industry standard program for drawing manga in Japan. If you want to get into the industry, or if you’re even just looking to draw for fun or create your own webtoon, Clip Studio really can’t be beat. We have a 30-day free trial

if you want to check it out, so no reason not to start right now!