The 5 Worst Anime LIVE-ACTION Adaptations Ever 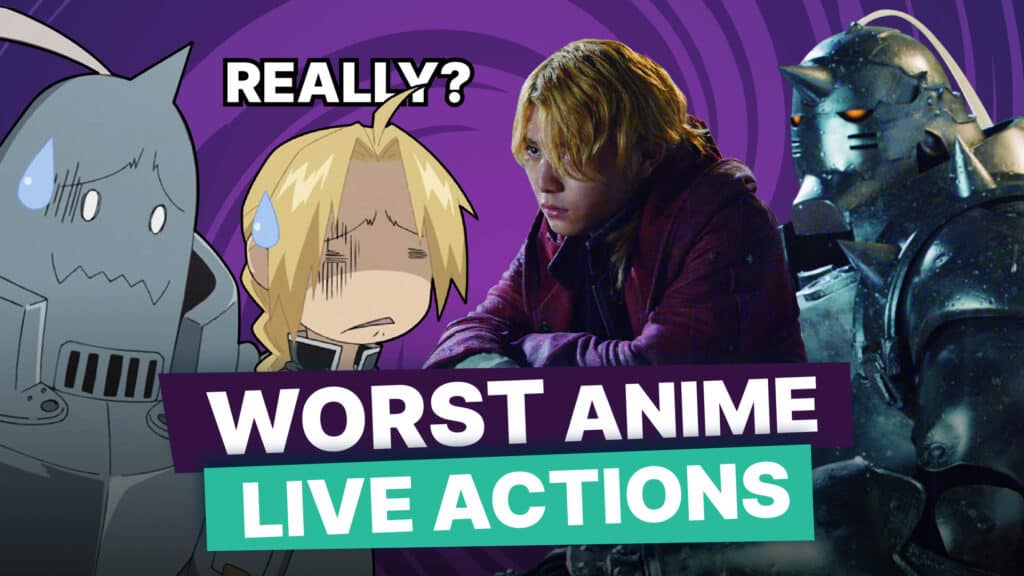 But are they really the biggest failures in live-action anime or manga adaptations?

In this video, I’ll tell you, according to Japanese people, what the worst live-action movies are, and also which ones lost the biggest amount of money at the Japanese box office. One of them lost more than 80% of the money invested!

I remember that I watched this one in Japanese theaters when it was released in December 2017. According to hundreds of rankings, Fullmetal Alchemist, along with Shingeki No Kyojin, are considered two of the greatest series of all time so I had big hopes that the adaptation might be good. But, low-quality special effects, bad screenwriting, and also Ed looks older in the movie when he should look younger. These and lots of other things made this movie a disgrace.

The production cost of this movie was $7.8 million USD and they made $9.6 million USD at the box office so they barely got a return on their investment.

And you’ll be surprised to know that the series will get two new live-action films in 2022. Yeah, I can’t believe it! The first film, Fullmetal Alchemist: Final Chapter – The Avenger Scar opens on May 20, and the second film, Fullmetal Alchemist: Final Chapter – The Last Transmutation opens on June 24 in Japanese theaters and depicts the story’s final battle. The films will feature returning cast members from the first live-action movie.

Also, some key characters that were missing in the first live-action film, such as Scar, King Bradley, and Alex Armstrong will appear in the sequels. Damn, I want to watch Armstrong flex his muscles!

But, the next entries, especially the top two, lost a lot of money.

This movie was launched in 2017 to celebrate the 30th anniversary of the long-running manga series. The live-action movie adapts the first 17 chapters of Part 4 of the manga, which is an odd place to start any live-action Jojo story. They skipped the first 3 parts. Phantom Blood should be a better start.

The stands looked fine, but I didn’t like the movie. Something else that I didn’t understand was that Part 4 takes place in Morioh, which is a fictional analog to the real-life Sendai, Japan. In other words, many of the locations that you guys see in the manga and anime you can visit here in Japan, but they decided to film most of the movie in Spain.

The production cost of this movie was $eight million seven hundred USD and they lost 8% of the investment.

Based on the manga of the same name, this movie was released in 2016. There were high expectations since the director is Takashi Miike, well known for directing Ichi the Killer, Over Your Dead Body, and more.

The film keeps the essence of the manga but somehow manages to make the whole thing boring. The adaptation doesn’t measure up visually, it kind of looks like Power Rangers, and in general, the movie is terrible. No wonder they lost $6.5 million USD of their investment.

Now, I’m going to tell you about a movie adaptation that is quite good, but you’ll be surprised that Japanese reviews rated this movie as a terrible one.

I’ll be honest, I think that it’s a good movie and the reviews from overseas fans like you are quite positive.

The story is an alternate version, but I don’t think it’s a bad thing. The plot was coherent and they tried to make the best out of the manga. Good battles, costumes, and the hollows look cool. Of course, Byakuya is nowhere near as good-looking as his anime counterpart.

Byakuya is supposed to look hot and badass, but he doesn’t look like that in the movie. The film has a couple of things that they could have done better, but in general, it’s worth watching.

Even though outside of Japan the reviews are only decent, Japanese people trashed this movie. The ratings are quite low, many Japanese people complain that the costumes don’t look good, and they couldn’t recreate the coolness of the characters. Also, they said it looks more like a school festival rather than a faithful manga adaptation.

They lost more than $8 million USD, so I don’t think that we’re going to get a sequel.

And number one, we’ve none other than you-know-what.

Dragon Ball Evolution. This movie lost 82% of its original investment. I don’t know what else I can tell you about this horrible movie that you don’t already know. Dragon Ball is one of my favorite anime, so as a die-hard fan; this movie was an insult.

You might be shouting at the screen and saying, but Alfred, Shingeki No Kyojin, and Netflix’s Death Note should be the worst! I know, both movies are terrible, but can we consider them failures in terms of sales?

As I mentioned before, this choice for the top is based on the movies that lost the biggest amount of money at the Japanese box office. Netflix’s Death Note streams only on Netflix and we don’t have the numbers to know whether it was a failure in terms of money. Death Note might have gotten a lot of views, which would mean Netflix could at least recover the money invested.

As for Shingeki No Kyojin, it made more than 4 billion yen in total from both movies so it’s not really a failure, since they made a decent amount of money.

Also, this choice includes live-action adaptations of series where the manga has more than 100 million copies in circulation. So that means, that since the fan base is quite big, and if at least a small percentage of the fans went to watch them, they should at least recover the money invested, which didn’t happen in Jojo, Terraformars, Bleach, and Dragon Ball’s adaptations.

Also, there are lots of upcoming live-action adaptations like Yu Yu Hakusho, Saint Seiya, and others. Which ones are you the most excited about? Leave a comment below right now and let me know.

Also, if you want to know about the best live-action movies according to Japanese and also which live-action adaptations are the highest-grossing of all time, click here to find out.

If you enjoyed this video, don’t forget to subscribe and click the bell so you don’t miss our new videos, and I’ll see you in the next video!