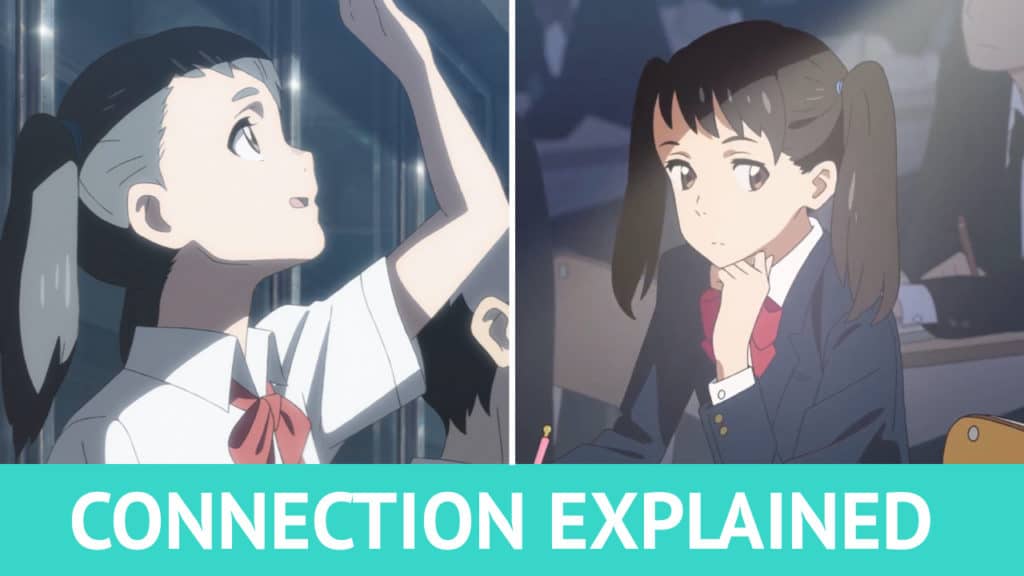 This article was based on one of our videos. Make sure to watch it!

In case you missed it, here’s Part 1, which focuses on Mitsuha and Taki’s cameo.

Other than Mitsuha and Taki, who else made cameos in Weathering with You?

Well, there were many:

If you remember, there was one scene at the end of Your Name where Yotsuha was sitting in class in her high school uniform.

Towards the end of Weathering with You, when Hina disappears, you may remember that there was one scene where the sky clears up and it becomes sunny out.

And that is where Yotsuha makes her appearance. She has one very quick scene where she comments about the weather.

Just like Yotsuha, they were in a very brief, easy-to-miss scene. At the end of Your Name, when Taki is job hunting, he is seen in a café.

Coincidentally, in that same café in a different booth, you can see Katsuhiko and Sayaka, so that proves that they did move to Tokyo.

Going back now to Weathering with You, you may remember a scene in Odaiba where Hodaka and Hina are at a street market, and they are asked to clear the weather.

After the sun comes out, there’s a scene where two people approach a window and say, “Amazing.”

Those two people are Katsuhiko and Sayaka! Just like Yotsuha, the voice actors are the same as in Your Name and Weathering with You.

So, it is confirmed that those characters are in the movie.

There was one scene in Weathering with You where Hodaka and Hina are seen talking to two random girls.

In the background, you might have noticed that Godzilla, Hatsune Miku, and Aqua are all grouped together. Also, the original Pretty Cure (Cure Black and Cure White) are featured, who are produced by Toho, it’s a popular magical girl series, much like Sailor Moon. 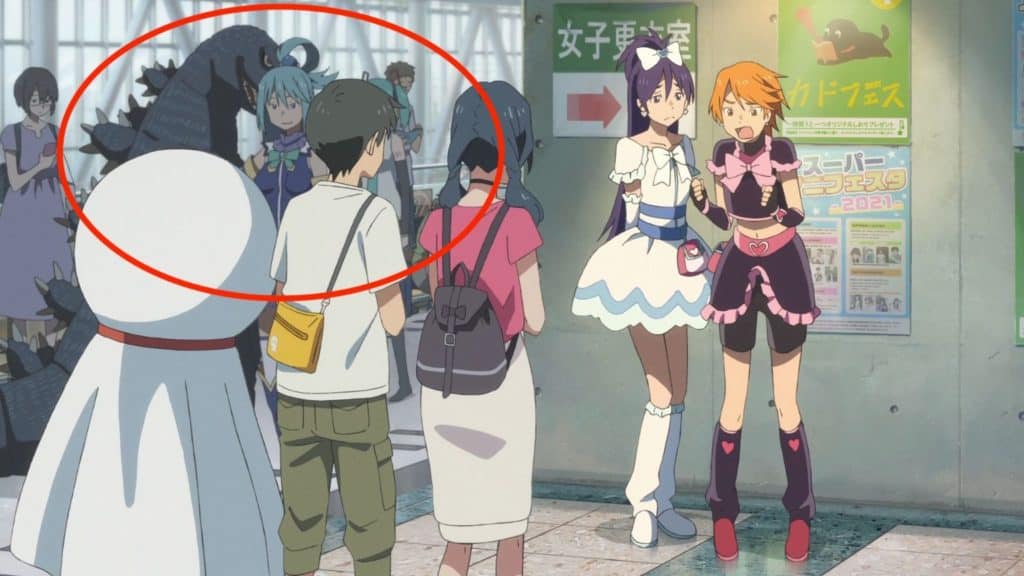 And you may ask yourself, “Why was Godzilla in the movie?”

Well, Godzilla was also produced by Toho who was the distributor of Weathering with You. So that explains that connection.

For Aqua, She is a character in KonoSuba, which is owned by Kadokawa and Kadokawa is one of the big clients of CoMix Wave Studios, which you may know is the producer of Weathering with You.

And as far as Hatsune Miku is concerned, well, I have no idea. I’ve done a lot of research trying to figure out why Hatsune Miku was in the movie, but I couldn’t find any connections.

If you have any ideas, please leave us a comment below because I’m very interested to know why.

When is Makoto Shinkai’s next movie coming out?

On average, his movies come out about every 2 to 4 years. It has been confirmed that his next movie Suzume Locking Up the Doors (Suzume no Tojimari) is being released this year! It releases in Japan on November 21, 2022! I’m excited about it, are you!?

There was a tweet in May 2020 that Makoto Shinkai put out saying that the new movie was in the works. 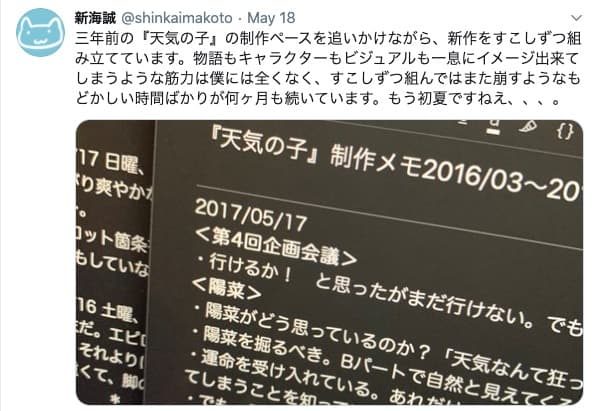 Will Hodaka and Hina be in the next movie?

As you know, all of Makoto Shinkai’s movies are in the same universe.

For example, Yukari Yukino from Garden in the Woods had a cameo in Your Name, and I already talked about all of the cameos that were in Weathering with You from Your Name.

So naturally, you would think that Hodaka and Hina would be in Makoto Shinkai’s next movie, but there was an interview where Makoto Shinkai said he sank Tokyo under water so he’s not sure if they will be in his next movie.

Where can I buy the ring that was featured in Weathering with You?

So, do you remember this store from the movie? 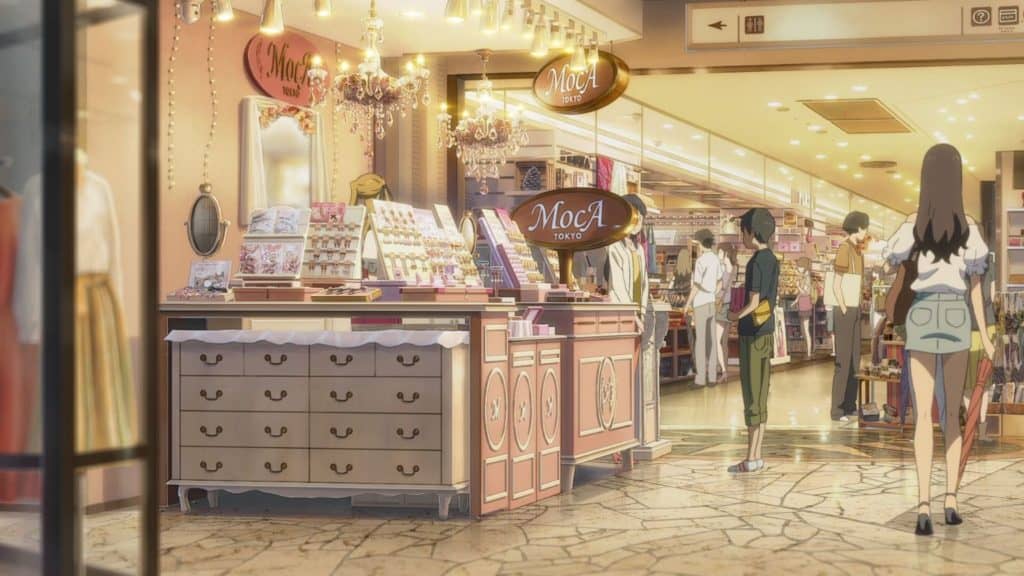 This is where Mitsuha did her cameo and where Hodaka bought the ring for Hina. It’s actually a real-life location and it’s in Shinjuku, Tokyo. 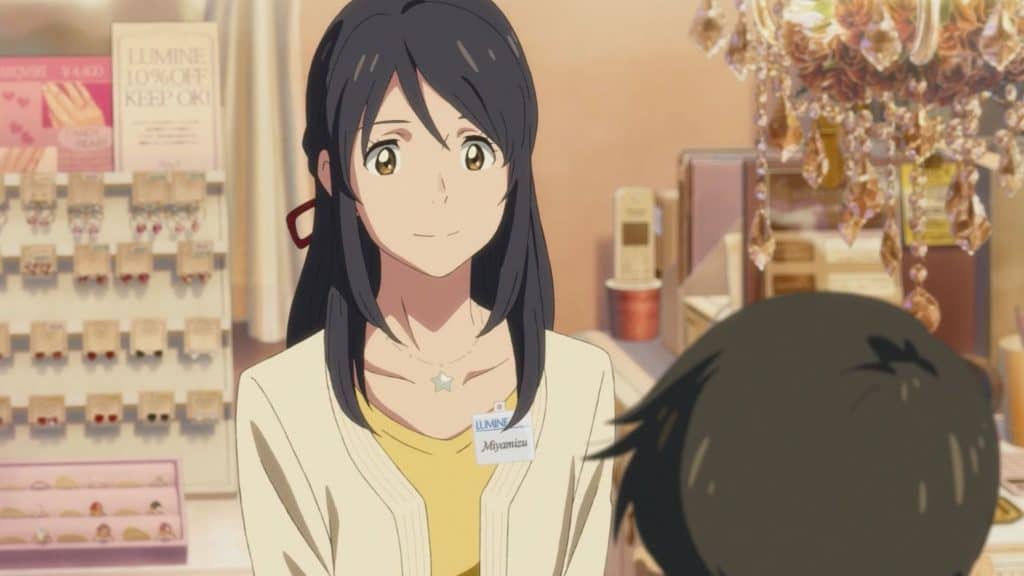 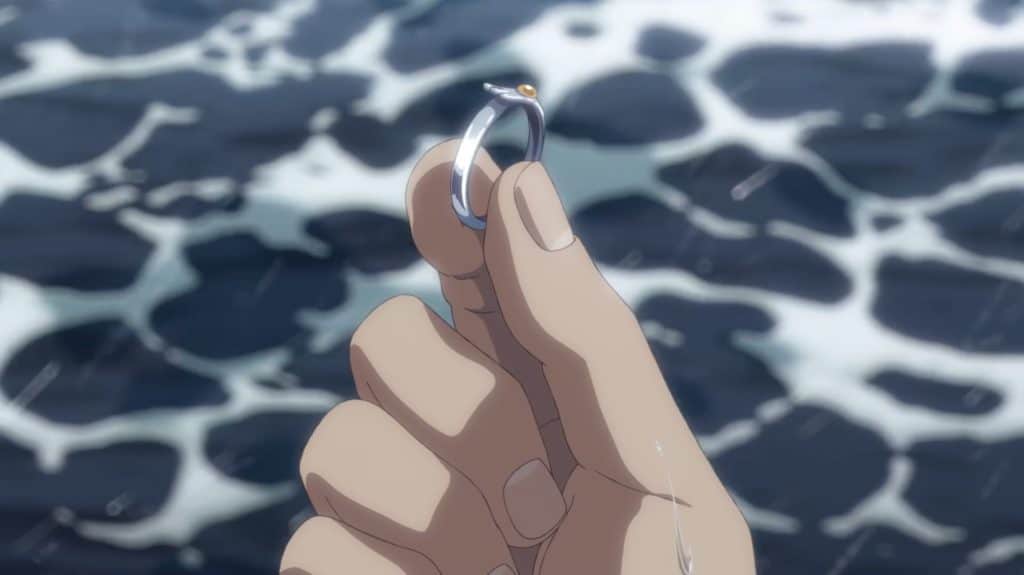 I wrote several articles and videos about Weathering with You and Your Name, make sure to check them out.

Also, in case you missed it, here’s Part 1, which focuses on Mitsuha and Taki’s cameo.