How Much Money a MANGA Artist Make? 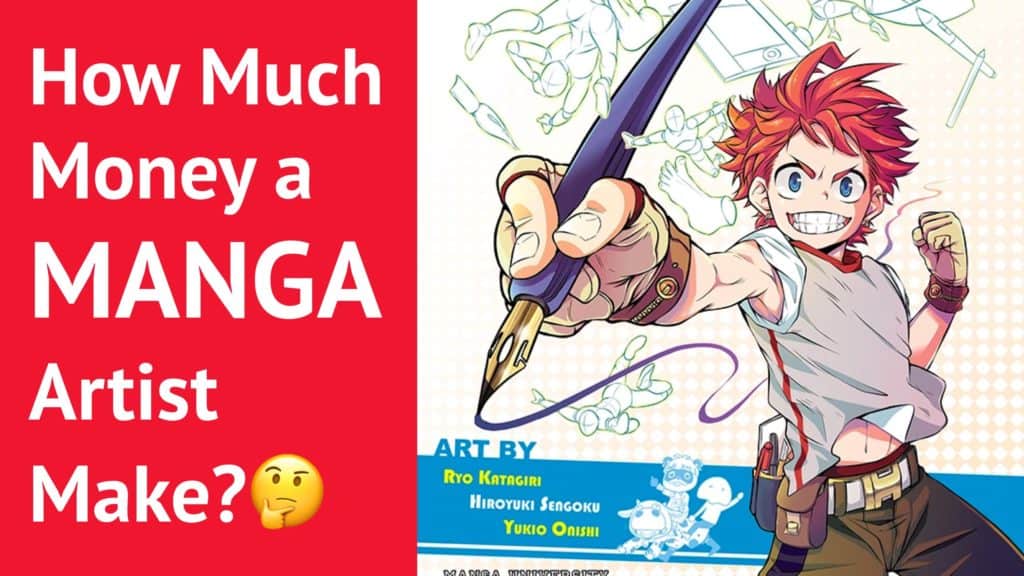 Make sure you watch/read until the end because I have two big surprises for you.

A manga artist is a person who makes the art for comics or Japanese graphic novels.

You might think of a manga artist, it’s somebody that works for a big publisher like Shueisha or KADOKAWA, but they are actually many roles for a manga artist.

Some small freelancers might do advertisements for local businesses.

What is the typical income for a manga artist in Japan?

It’s actually very complicated. So to put it short, there’s no direct answer.

But according to Shukatsu-Mirai and Chewy,

And if you are a manga artist assistant, according to Nenshuu, you get around ¥200,000 a month.

How does a manga artist get paid?

There are two main ways.

For the manuscript, you can expect around ¥3,000 (29 USD) per page according to NewsMatoMedia.

It all depends on your ability to negotiate your own contract, how famous you are, and what kind of previous work you’ve done.

Of course, if your manga gets very successful and gets an anime or video game adaptation, that’s an extra source of revenue.

Besides royalties and the manuscript, there is another source of potential income.

You can work as an illustrator. Some of the anime in bookstores in Japan will actually hold events dedicated to illustrators to support their work.

For example, Shimahara, the manga artist for Iyapan, a few months back had an event where he was selling tapestries from Iyapan but he also does work on the side selling illustrations to some art books.

As a manga artist, if you have the talent, you can definitely make it work.

Starting off as a manga artist can be very financially difficult. So you may be wondering,

What’s the best way to support your favorite manga artist?

There are two main ways.

If you turn to the last page of the manga, they’ll have an address where you can send fan letters.

Don’t worry if you don’t speak Japanese because many of the big publishers will try to translate your messages.

They do know through the publisher first though, so if you write anything negative, the mangaka will probably not need read it

So now you know how much a manga artist makes and how you can get paid, but

Can you become a manga artist even if you’re not Japanese?

A few years ago, it would have been very, very difficult to do that.

He does the art for the manga of Dr. Stone.

So there’ll be many more opportunities for foreigners to get involved in the industry.

How do you become a Manga Artist in Japan?

We have a full video talking about it:

If you want to become a manga artist, you may be asking where do I start.

There are tons of resources to learn manga but most of the courses are by hobbyists, not by professional manga artists.

Don’t worry, I got you. Also, I have a good surprise for you, well actually two.

As mentioned many times on the website, we would only recommend products we truly support. That’s why we have teamed up with Manga University for this video. Manga University has a great line up of books related to learning how to draw manga as well as a variety of others that we personally like.

So, if you want to become a mangaka, I would recommend this book:

How to Draw Manga: Basics and Beyond!

It is a great guide that helps you create amazing manga characters taking it one step at a time. Each chapter focuses on one theme and builds off the previous. Start off learning how to draw heads, move along to bodies, and then onto poses.

But, that’s not all. One of the authors of How to draw manga is the professional mangaka Ryo Katagiri.

She has already had two of her manga published here in Japan. One of them is called tutti!

A slice of life manga about three students who want to make music together. It was published in Weekly Shonen Sunday, a leading Japanese manga magazine that has also given us ‘Detective Conan’ and ‘Inuyasha.’ Katagiri knows her way around much more than just a sketchbook.

You can buy this book on the official website of Manga University or find it at your favorite online retailer. If you buy it on the website and use the code MIPON20 you’ll get an extra 20% discount.

The lessons are conducted in English by Ryo Katagiri and her Manga University colleagues. Whether you are a beginner or more advanced, these lessons are great for all ages. Including kids!

The second surprise that I have for you, is that we will be doing a giveaway all thanks to Manga University. 5 lucky winners will receive a free group online drawing lesson with Ryo Katagiri and Manga University.

Don’t miss this rare opportunity to study with a professional manga artist!

And even if you’re watching this video after the contest has ended subscribe anyway to be notified about more giveaways in the future!

Again, a big thank you to Manga University!