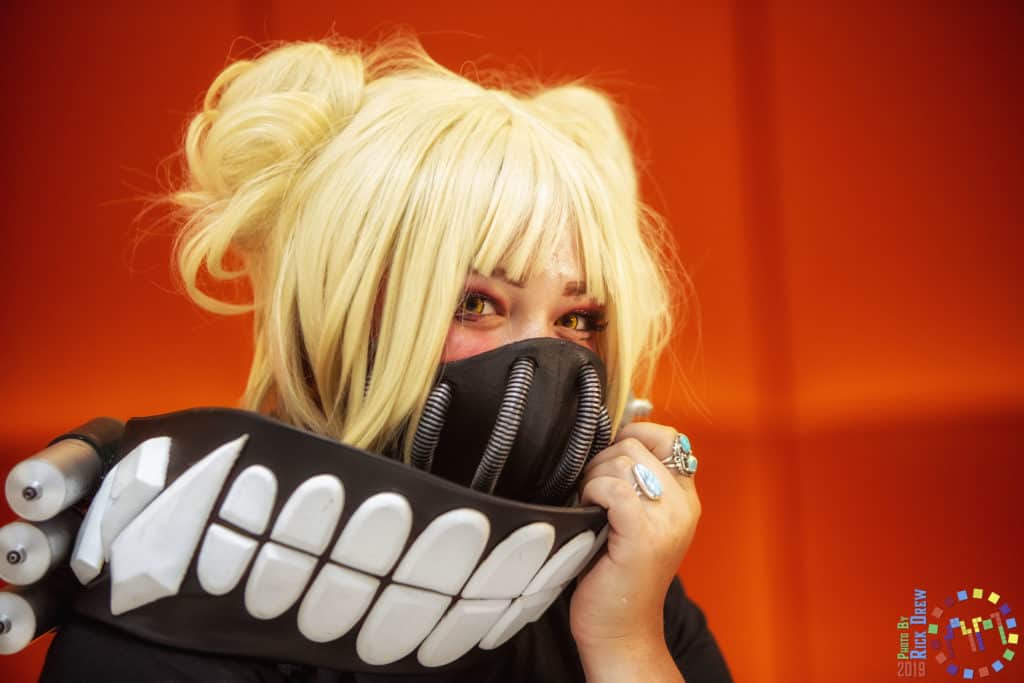 Please Note: AnimeMidwest has been moved to 2021.

Looking for anime events in Chicago?

If you’re visiting Anime Midwest for the first time, or even second or third time, this guide has everything you need to know to get the most out of your visit.

Anime Midwest 2021 is a family-friendly anime convention in Rosemont, Illinois.  A three-day weekend event that starts in the morning and lasts until 2 am on Friday and Saturday, and until 5 pm on Sunday. 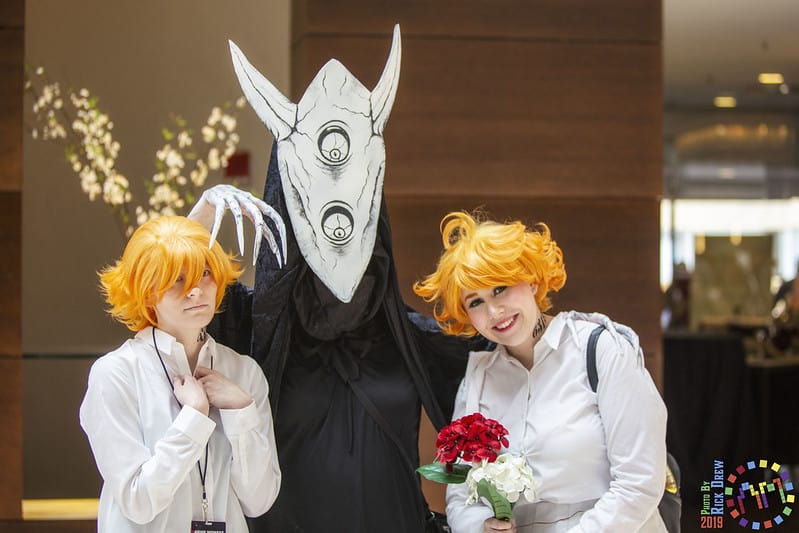 Around sixteen thousand people come to the event every year and they have a lot of fun doing it.

Over 80% of attendees come in cosplay, many of them bringing a different cosplay for every single day of the convention. That’s over 12,000 cosplayers! If you count each separate costume, you might see 20,000 different costumes! 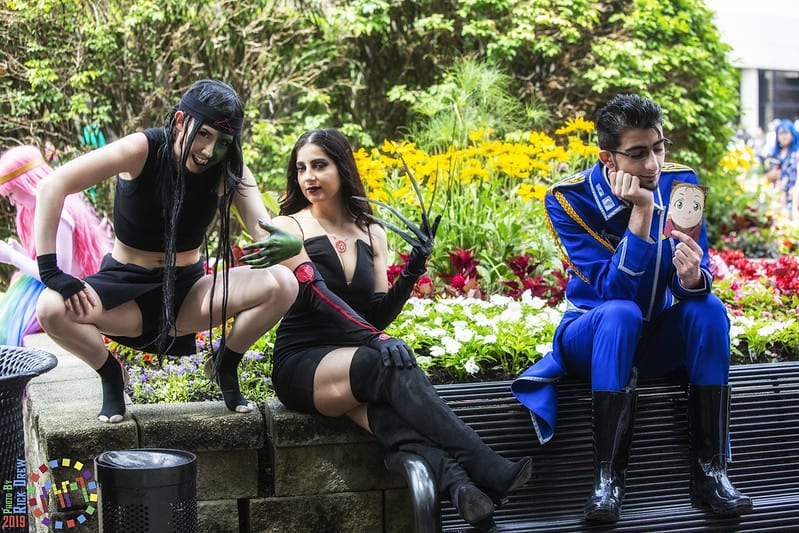 There are usually awesome concerts on the major nights – Friday and Saturday – featuring bands that are either local or from Japan.

These concerts run like a music festival on an incredible stage that feels like the anisong, usually played from your computer speakers exploded out onto the stage. There’s a huge video wall that completely surrounds the stage and looks impressive and epic. 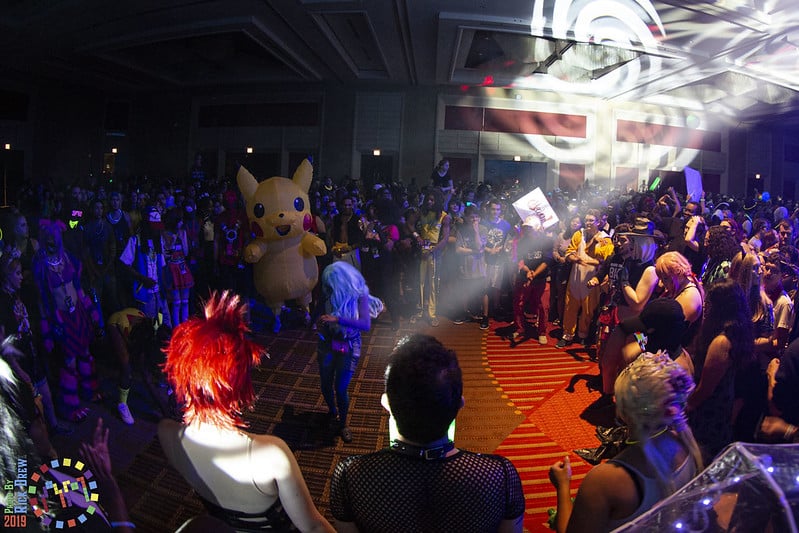 The Anime Midwest exhibit hall is a central source for anime fans to gather and shop, with hundreds of vendors and independent artists selling anime-related stuff. 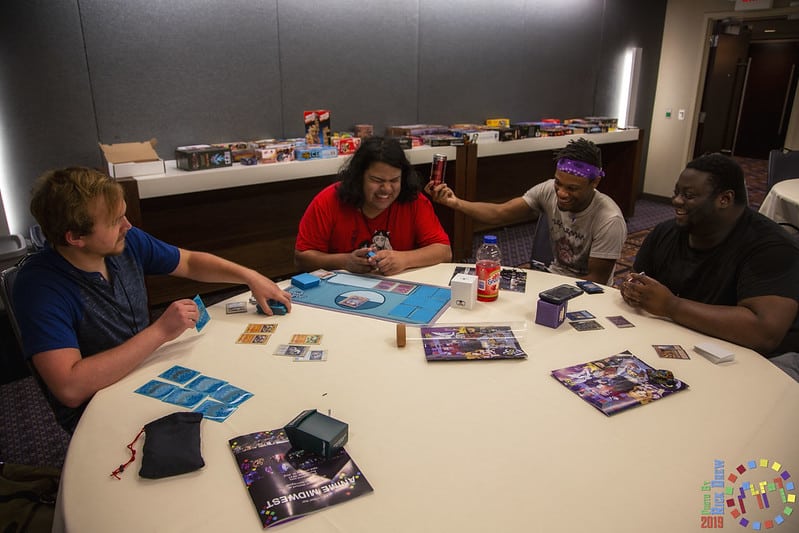 Famous members of the anime industry also appear as guests every year, from US anime dubbing voice actors to Japanese guests. 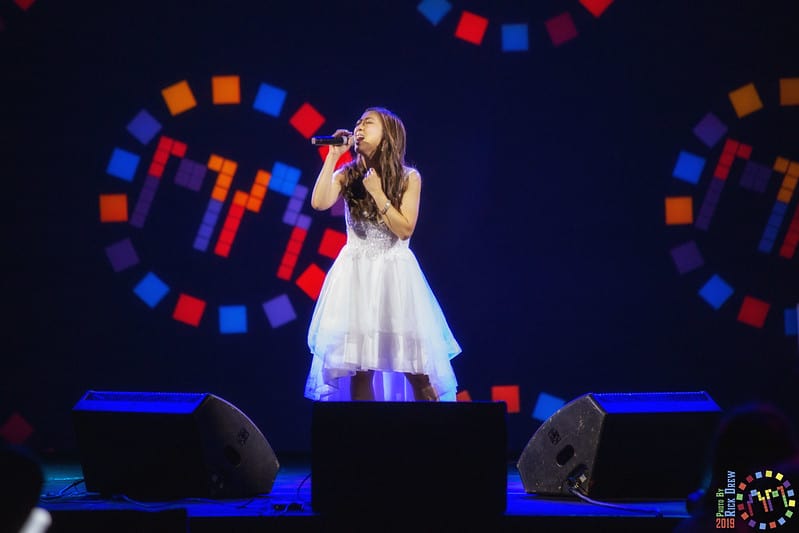 Examples of the kinds of guest you’d see are:

They can be one of the best places to get really unique insight into the anime industry, which is a goldmine for hardcore fans.

There’s also a photo studio where photographers will take pictures of cosplayers and put them online in super high quality for free. 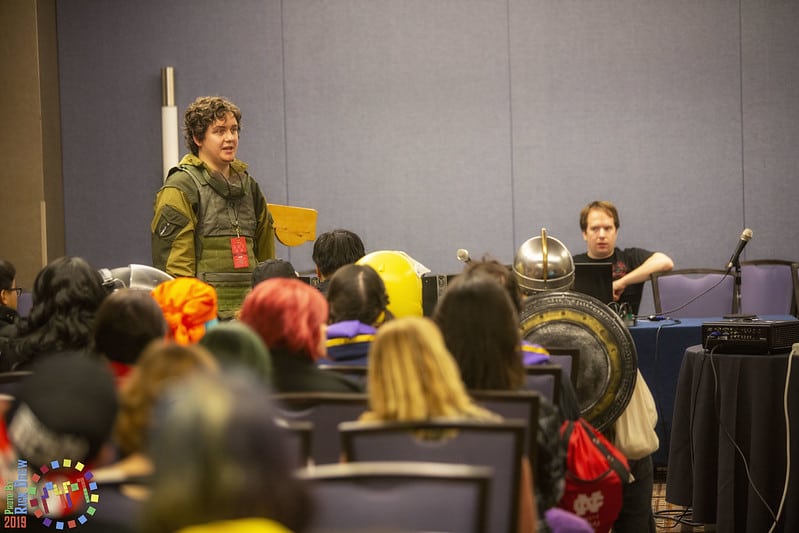 The anime convention also has its very own maid café with a Japanese-style karaoke.

Excitingly, every night features a rave dance party on a huge stage with really great music playing. It’s a great way to get out that extra energy before sleeping to prepare for the whole next day of the convention. 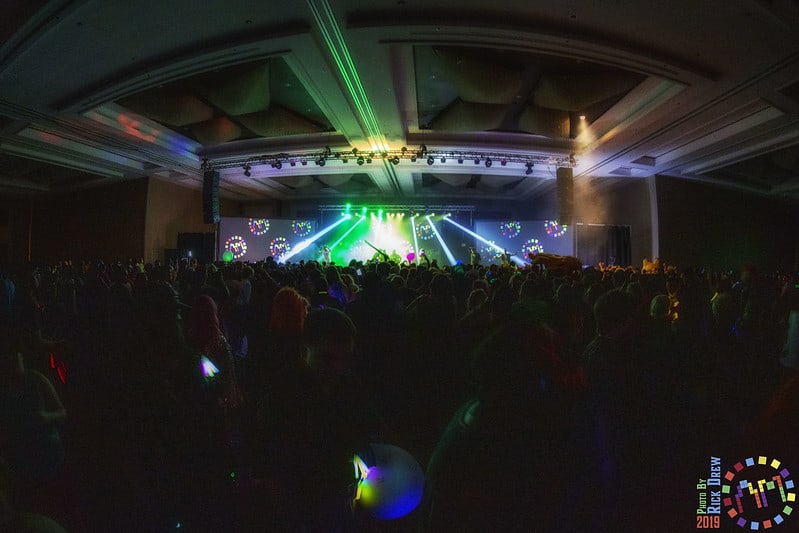 When is Anime Midwest held?

Once per year around the first week of July. This year it will be held from July 3-5. Often, you might hear people lighting off fireworks nearby because of the 4th of July. (Note: fireworks are prohibited at the hotel because the airport is nearby.) 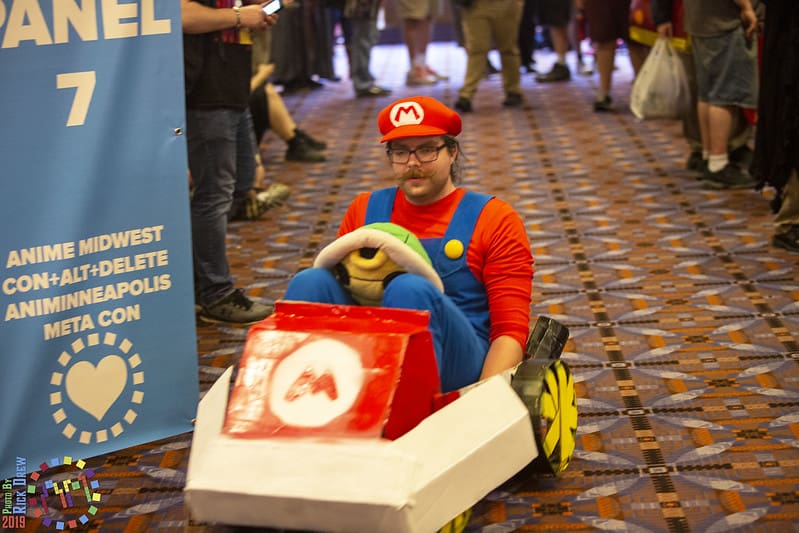 Check out their official page. They have a well-written guide with all you need to know about securing tickets.

What’s the best part of Anime Midwest? What makes it the best Convention in Chicago?

ConSweet! Anime Midwest has the entire first floor of the Hyatt Regency O’Hare giving out free snacks, food, and drinks.

The staff also give away almost $8,000 in instant ramen to attendees over the course of the weekend!!!!!!

This anime otaku convention really wants people to be able to stay at the convention all day long, making friends and interacting with the cool guests that they bring in every year. 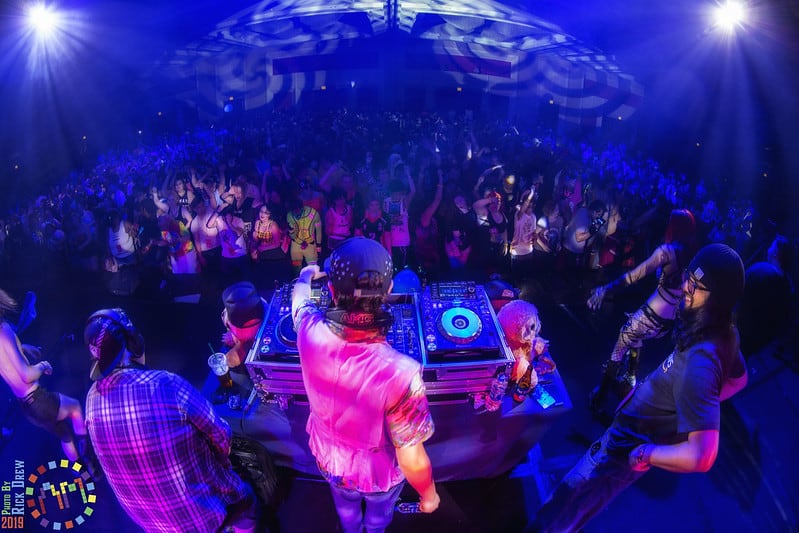 At other conventions, you might have to leave to find food or pay very high convention center or hotel prices for lunch, but not at Anime Midwest!

That said, of course the most important reason to come to Anime Midwest is to see some fantastic members of the anime industry.

They have had guests who have been involved in the very first anime localizations in North America, all the way up to guests who are directing brand new anime for Netflix. 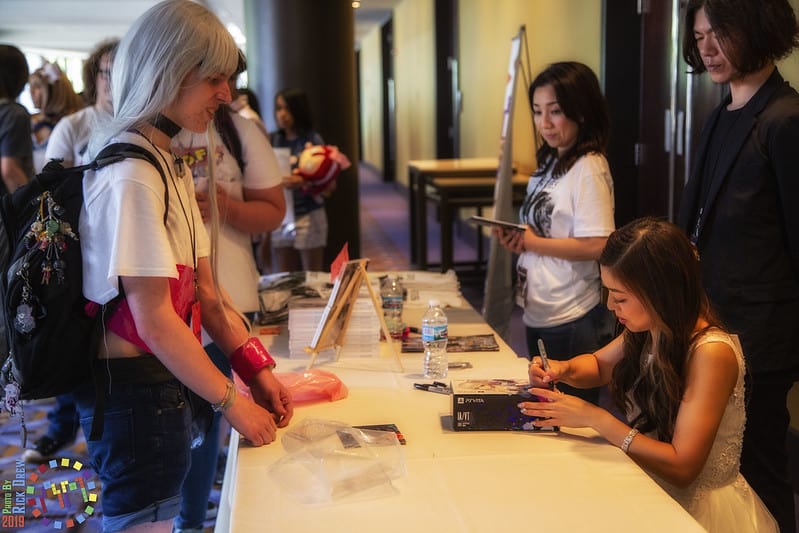 These people love anime and know the anime industry inside and out, and you can meet them there at Anime Midwest. They also make sure that it’s not like a comic book convention; you don’t have to pay anything extra to meet the guests.

What’s the best day to go? Friday, Saturday, or Sunday?

Saturday is always the busiest day (for any anime/comic convention), so if you love bustling crowds and cosplay, you definitely want to go on Saturday.

They often have really amazing concerts on Friday night though, so if you’re into concerts, I suggest Friday. If you don’t like crowds so much, then Sunday it is! 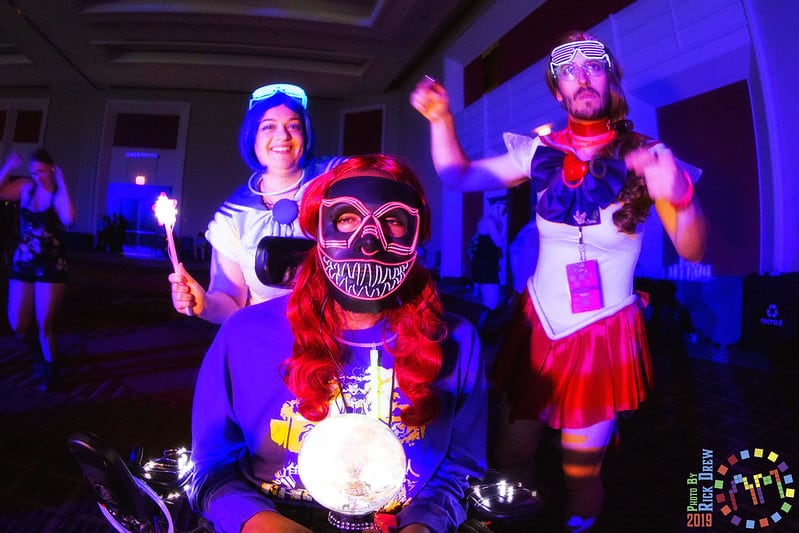 Can I buy food and drinks inside the event?

Of course, and they give them away as part of ConSweet too.

The exhibit hall has also recently started offering local craft beers for the adult attendees who want to drink something unique and local.

And the vendors sell lots of Japanese snacks, ramune, and pocky.

First, your love for anime! Second, lots of money to spend for the exhibitor’s hall and vendor’s room. Third, a cosplay if you can make or buy one in time! 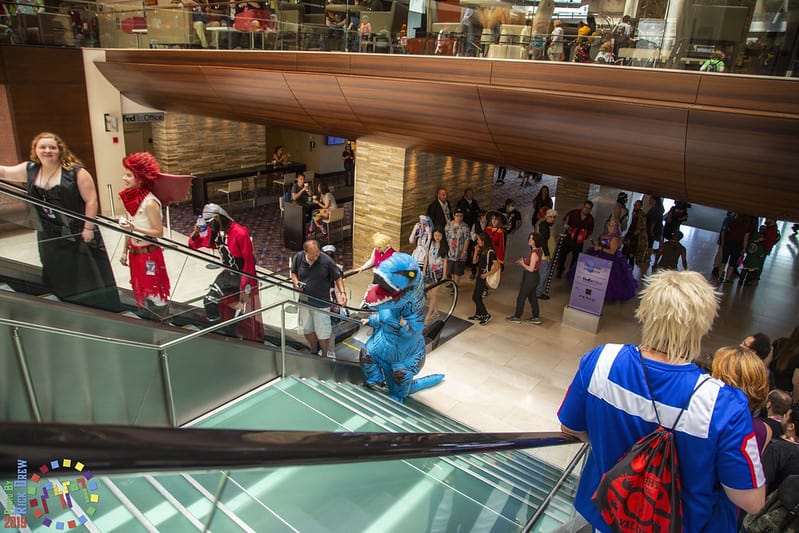 Badges sell for $40 to $60 depending on how early you get your badge for the convention.

Once you’re at the convention, that’s essentially all that you NEED, however you’re going to want more money to spend in the show floor and artist alley!

Unlike some other events, you don’t have to pay to see the guests.

Their panels are free as well as autographs too, so you can get a DVD you own signed for free by a voice actor you like or by one of the creators.

Not bad at all!

Two years ago the event had lines at registration that were two hours long, but now that’s under control.

Most of the lines, except autograph lines, are pretty short, thankfully. 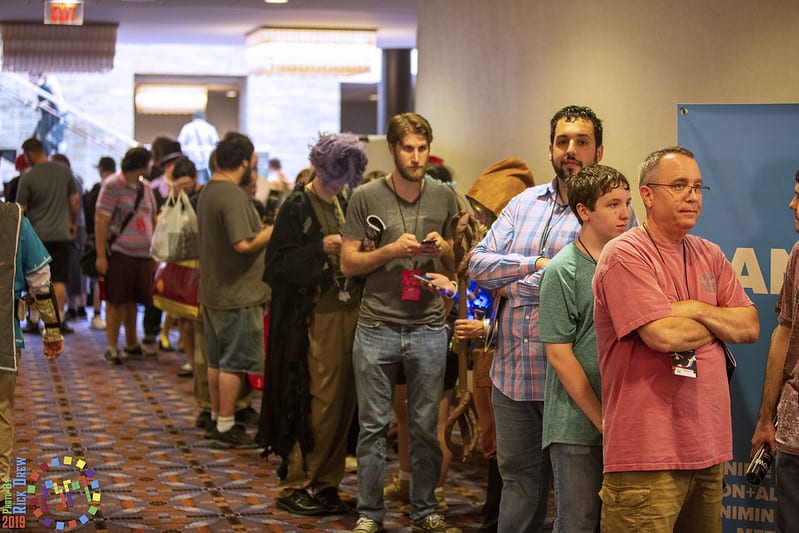 Autographs for the most famous voice actors can still be quite a wait though.

Anime Midwest is the perfect size where most of the events are pretty easy to get into, with lines rarely more than an hour long.

Lines at the late-night dances and cosplay contests are growing every year, so I recommend you get in line for them early.

What time should I leave?

You shouldn’t leave until the convention is over on Sunday!

The only way to truly experience the convention is to be there from Friday morning to Sunday afternoon.

For that, you want to book a hotel room at the main convention hotel, the Hyatt. But they also have hotel blocks at almost ten different hotels in the area. 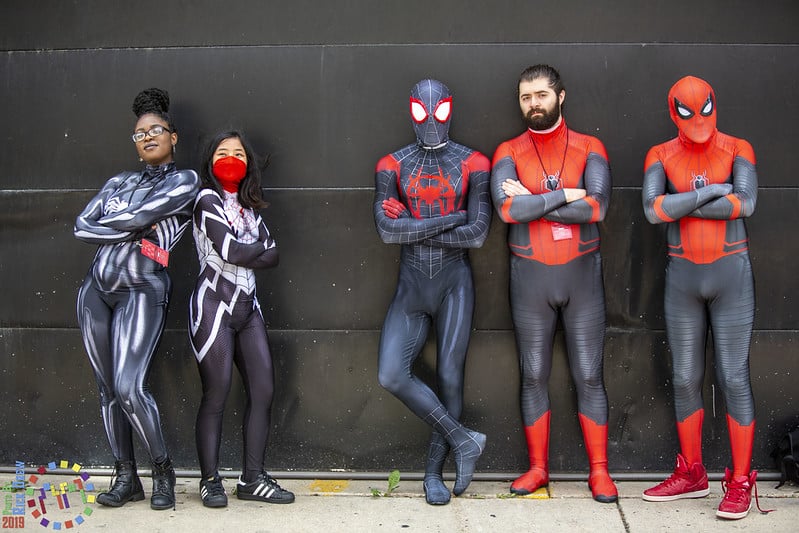 Heck yes! Imagine paying for movie tickets at a theater – $20 for just 2 hours of fun.

The typical anime convention, including Anime Midwest has over 50 hours of fun for around $50! 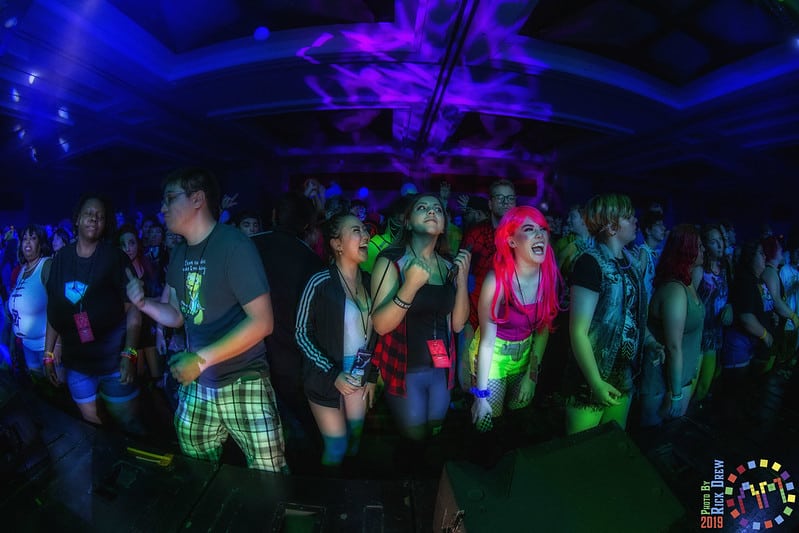 It’s such a steal, you can’t afford NOT to go! Now that’s my kind of investing! Stocks in fun are up!

Anime Midwest is the most amazing anime convention for any fans in the Midwest – Iowa, Illinois, Michigan, Minnesota, Indiana, and beyond.

The people attending are super friendly and there are so many incredible cosplays to see that it’s unbelievable! Trust me, the tips in this article will help you to take advantage of the event!