11 Facts About Legend of the Galactic Heroes 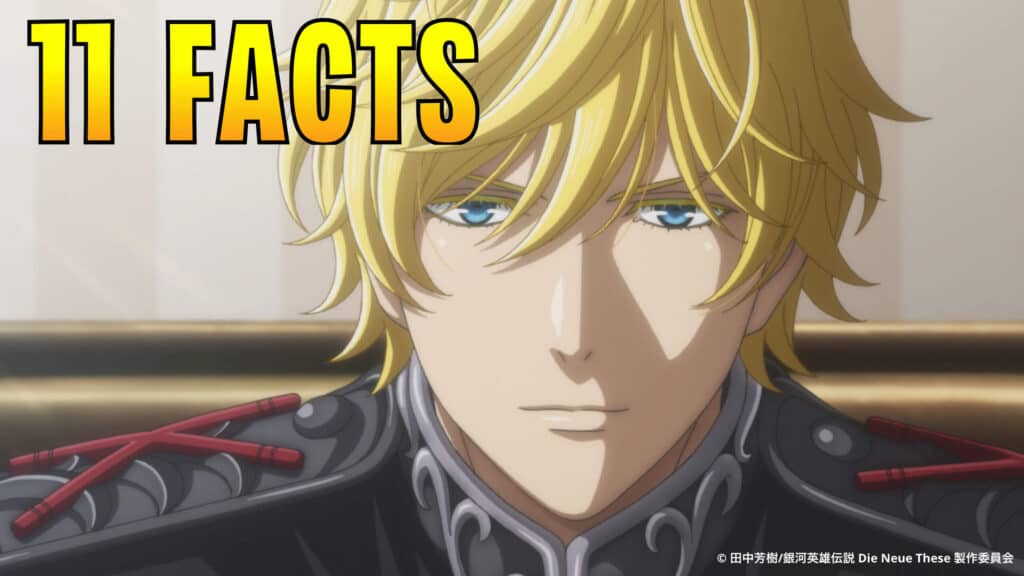 Here are 11 things that you probably don’t know about Legend of the Galactic Heroes.

If you want to win a copy of the novel signed by the director, then keep watching until the end.

The main story has received two manga adaptations and two anime adaptations. The first anime adaptation is commonly known as the “original anime” and was released gradually between 1988 and 2000. The second adaptation, Die Neue These, that’s how you pronounced it in Japanese, but I’m not sure how to pronounce it in English or German. Die Neue These or DNT is currently ongoing. Season 1 was released in 2018, season 2 in 2019, and season 3 in 2022. It’s likely that this new adaptation will adapt the entire main novel series, the same as the “original anime”.

What’s the main difference between the original anime series and DNT?

The answer is “perspective”. But, what does that mean? Let me explain: while the original series takes a much more distant and impartial view of events, DNT is a more close-up approach and focuses more on the “human” element. That means DNT sometimes does not adapt certain parts of the original novel or anime in order to create a more consistent narrative.

While some fans criticize DNT for this reason, I don’t think it’s a bad thing. It’s simply a different approach, and I feel that it complements the overall Legend of the Galactic Heroes story quite nicely.

There have been many video games based on Legend of the Galactic Heroes.

Earlier games were only for obscure computer systems and game consoles that were only available in Japan. However, there were some games in Japan only for the SNES, Saturn, PlayStation, and even web browsers.

While the games mentioned before are no longer available, there is a mobile game in the works. We don’t know much else at the moment, but there is an official website with a picture and with a text saying “Game is in the works.”

Many of the Free Planets Alliance battleships derive their names from ancient mythologies or empires, including ‘Marduk’ who was the patron god of Babylon, Leonidas, a Greek King, and Hyperion from Greek mythology. Another example, and also the longest ship name in the series, is the Free Planets Alliance battleship, I’ll do my best to pronounce it; Tlahuixcalpantecuhtli.  The name comes from Aztec mythology, in which Tlahuixcalpantecuhtli plays an important role.

I’ll elaborate on this later, but as you can see, the author is a big fan of mythology and history.

And remember guys that I have not only one, but two special surprises for you at the end of the video.

Yoshiki Tanaka, the author of the original Legend of the Galactic Heroes novels is also the author of other popular series. These include The Heroic Legend of Arslan, which is currently being adapted as a manga. The person in charge of the manga adaptation is Hiromu Arakawa, who is best known as the mangaka of one of the greatest manga of all time, Fullmetal Alchemist. The Heroic Legend Of Arslan also received an anime adaptation in 2016.

The classical music of Legend of the Galactic Heroes is one of the series’ most notable aspects for both the original and DNT. For example, The OST for the original OVA series alone comprises 24 CDs! The original anime series uses mainly existing pieces of classical music, while DNT features many new orchestrated pieces by composer Shin Hashimoto.

The gender of some characters are reversed. For example, Adrian Rubinsky, the leader of the Dominion of Phezzan, became “Adriana Rubinskaya.”

According to the author, Yang Wenli’s name in Chinese would be written as this 楊文里. However, in Chinese language translations of the novels, his name is written as 楊威利. The exact reason isn’t known, but it may be that although Tanaka-sensei is well-versed in Chinese history/literature, he’s not a native speaker, and 楊威利 may have been considered a more natural transcription to the Chinese translator.

Yang’s original voice actor, Kei Toyama, passed away while the original anime was still in production. He was replaced by Goda Hozumi.

While there has been a lot of speculation, Tanaka-sensei, the original author, has said that none of the characters in Legend of the Galactic Heroes are directly based on a specific historical figure.

Instead, characters tend to be inspired by several different people. In addition to European history, Tanaka-sensei is very well versed in Chinese history as well as Persian history, so it is likely that he referenced them when writing Legend of the Galactic Heroes.

I have a confession to make, I’m very ashamed to say that I only recently started watching Legend of the Galactic Heroes, and I can’t believe that I waited so long to watch it. It’s a story with politics, government, psychological battles, and, of course, a lot of action.

If you’re into Code Geass, Psycho-Pass, and Death Note you’re a man or woman of culture, and of course, you’ll love this anime. I’ll definitely recommend it to you.

The first one is that if you want to know how closely the original creator, Tanaka-sensei was involved in the making of DNT, or why DNT is considered a new interpretation rather than a remake.  We interviewed the director, Mr. Shunsuke Tada and we asked him those questions and more.

The second surprise is that Tada-san, the director, was kind enough to sign some copies of the novel for us, which we’ll be giving away.

If you want to win one, just subscribe to our YouTube channel so you’ll receive a notification when we post the interview, and when we do the giveaway. If you’re already subscribed you don’t need to do anything else; just sit tight and wait a bit until we post it.

Also, if you’re watching us from the future, and the giveaway is already over, you should still subscribe, because we’ve got more signed copies from other authors and artists, and we’re planning to do more giveaways.

Likewise, let me know in the comments below, do you prefer the original version of Legend of the Galactic Heroes or DNT?

Make sure to subscribe and click the bell so you don’t miss our next video. Talk to you soon.