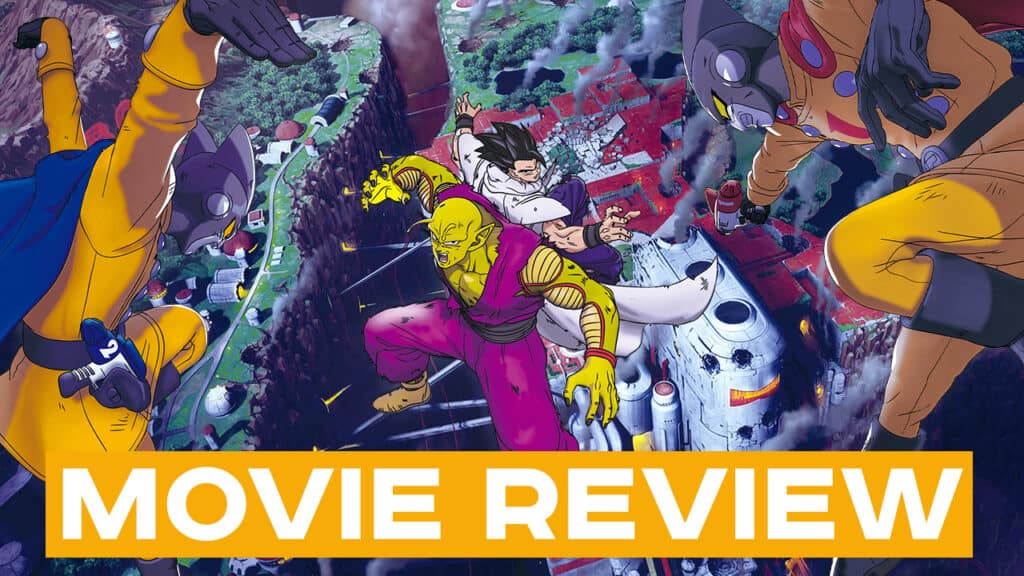 This review doesn’t have spoilers about the movie or the manga. So if you’ve only seen the anime, you can still watch this review with peace of mind.

Remember that in Dragon Ball’s universe, everything that Akira Toriyama, the original author, was involved in is considered canon.

Also, on the official website, Toriyama mentioned that he did the story, dialogue, and some of the character designs.

And let’s be honest, the hype around the movie depends 100% on whether Toriyama is writing the story, so I’m glad that we got an official confirmation of his involvement.

So, yes. The movie is canon.

When in the Dragon Ball’s timeline does the movie take place?

Super Hero takes place after the events of the movie Dragon Ball Super: Broly and before the Galactic Patrol Prisoner Saga and Granolah the Survivor Saga in the manga.

They don’t specify exactly how much time has passed, but it seems to be at least one year. I’ll tell you more details in the spoiler review that I’ll be posting very soon

How was the animation? Is the movie full CG or a hybrid?

But, before I tell you about the animation of the movie…CGI!? Why, Toei Animation, why?

Dragon Ball is one of the most profitable franchises and probably the most influential anime in all history. So why are you experimenting with such an important franchise?

There isn’t any official announcement on why Toei Animation decided to make the movie CGI. If you watch other videos about this topic, you’ll see people are just guessing the reason and I don’t like doing that.

The only thing that people who work at Toei have said in several interviews is that they wanted to try new animation styles.

I need to be honest with you, I didn’t like the animation of this movie.

No, I’m not saying the animation was bad or the staff did a terrible job. I think the staff nailed it. But, I just don’t like watching Japanese content in full CGI or 3D.

I watch Japanese animation and you probably too, because of the animation style. Combining 2D with CGI is a normal practice in the industry which I think it’s pretty good.

I would like to know why the anime production committee decided to experiment with one of the most important anime franchises of all time. Were they testing whether the fans would like it?

I mean, we’re talking about Dragon Ball! The fanbase is super loyal and we will pay to watch the movie regardless of the animation style.
I love Dragon Ball, and it’s my favorite anime.

It’s been the biggest inspiration in my life, and it’s why I decided to move to Tokyo. I’ll pay for my ticket to watch the movie because I’m a die-hard fan.

But, changing the animation will only hurt the brand. I hope that they’ll go back to the original 2D style.

I’m not an animator, so I can’t say for certain that the movie was full CG. But to me, it seems like it was.

But besides that, everything or almost everything was in CG. What a disappointment. Please don’t do this again, Toei Animation.

Specifically, there were three things I liked:

First, the movie makes sense. Bringing back the Red Ribbon Army was the right move, since besides androids, there aren’t any other enemies on Earth that can put up a fight against Goku and his friends.

Also, the plot of the movie fits very well into the overall story of Dragon Ball.

Second, there were a lot of slice-of-life scenes which I found quite fun. You can see how Piccolo is the real grandfather of Pan, and also the role that he plays in Gohan’s family.

Third, I love Goku and Vegeta, but let’s be honest–in the past arcs the story was too focused on them and didn’t give the other characters much attention.

But this movie was centered on Piccolo, Gohan, and Pan, expanding their stories and giving them a chance to shine.

Also, seeing Piccolo as a mentor to Gohan and fighting side-by-side with him was extraordinary, and it gives the movie a lot of emotional moments. Good work Toriyama.

By the way, if you didn’t already know, Piccolo is Toriyama’s favorite character, and it really shows in this movie.

Besides the animation, yesssss. Overall, the plot is quite good and if you like Piccolo and Gohan you’ll love this movie ten times more.

The Dragon Ball franchise is my favorite anime of all time and it’s the reason why I moved to Tokyo.

I’m a die-hard fan and Dragon Ball has been an inspiration in my life, so I enjoyed every second of the movie.

So definitely watch the movie. And as for the animation, well there is nothing that I can do about that.

I don’t like CG, but I’d much rather have a Dragon Ball movie with CG instead of no movie at all.

For now, it’s only in Japanese theaters.

As I always tell you, I know that you’re now desperately looking for a torrent of the movie, but you won’t find it. Japan is quite strict about filming movies inside the cinema. Believe me when I say that you won’t find the torrent.

Besides, keep in mind that downloading a torrent is piracy and you can get into trouble. Not to mention that torrenting affects the creators’ ability to make these movies.

But, here’s the good news. Crunchyroll announced that they will distribute the movie this summer in the territories listed here*, in both subtitled and dubbed formats.

At the moment of filming this video, it’s scheduled for August 2022 in North America.

Are there post-credits scenes or an announcement of a new project?

There is a post-credits scene, but it’s not an announcement of a new project.

But, the executive producer of Dragon Ball Super: SUPER HERO did say, in January 2022, “There is also a chance that something other than the movie will be coming this year too.”

If you want to know stuff like whether Piccolo has a new transformation, or whether Broly makes an appearance, make sure to subscribe because I’ll be posting a with-spoiler review of the movie very very soon.

Also, if you want to see what the theater looked like during the premiere of the movie, as well as some merch and a theme cafe, follow us on Instagram because I’ll be posting stories and photos of movie-related events and displays in Japan.

And because you watched until the end, here’s a bonus fact for you. Hedo is always eating Oreos during the whole movie and the reason for that is that Oreo did a collaboration with Dragon Ball Super. Right now, you can buy Oreos in Japan with Dragon Ball-themed packaging.