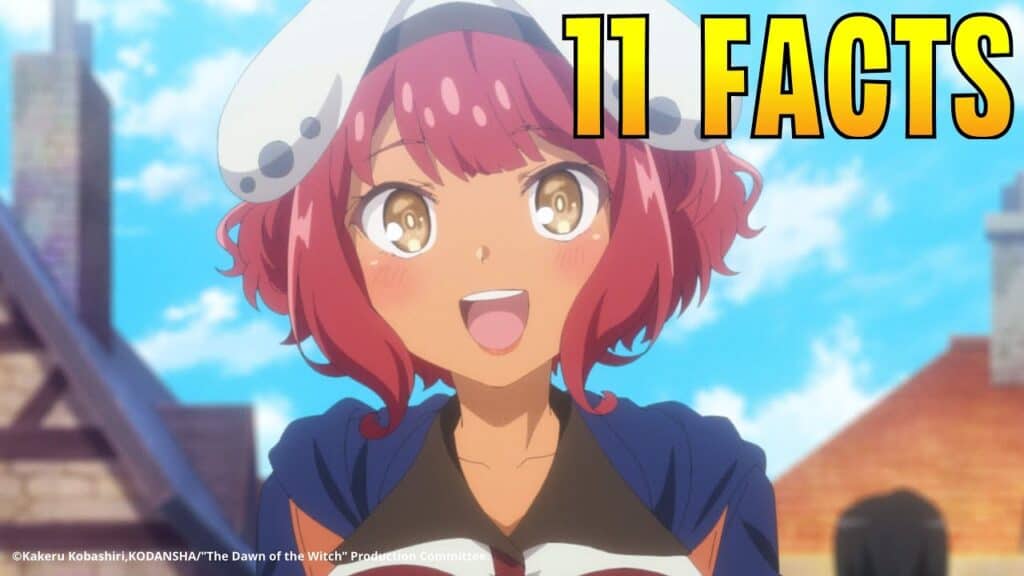 Dawn Of The Witch is a fantastic story with some great plot twists and if you’re a fan like I’m being, you need to know more. So I found 11 fun facts that you need to know about the series, and I’m going to share them with you guys now.

If you want to win a copy of the manga signed by the original author, then keep watching until the end.

A quick note before we start! This article contains affiliate links. This means that if you click a link, we may get a small commission at no additional cost to you. On to the transcript!

Dawn Of The Witch and Zero No Sho share not only the world, but also some characters. But you don’t need to read or watch Zero No Sho before jumping into Dawn Of The Witch. The author said, and I quote, “So I’d recommend that first, you go into The Dawn of the Witch totally fresh. If you want to know more about the story and characters, go read or watch Zero No Sho. Finally, go back and read The Dawn of the Witch again. Then you’ll have all those “Ah-ha!” realizations. That’s the kind of experience that I’m going for with this series.”

Did you know that Kobashiri, the author, decided to write this light novel around the time she was finishing the last volume of Zero No Sho?

She sent a rough draft of the initial manuscript to her editor. He was on board right away with the idea of publishing Dawn Of The Witch, and here we are! So, the series had very little downtime.

After she finished volume 1 of the light novel, she thought that if she was lucky, she would only be able to publish three volumes because she worried that people might not be interested in the story.

But when she was about to finish the manuscript of volume 3, she received a call that Dawn Of The Witch will receive an animation and she couldn’t believe it.

Kobashiri, the author, is a big fan of The Saga of Darren Shan and Lord of the Rings. Most of her inspiration comes from overseas work.

The manga adaptation of the light novel has been serialized in Kodansha’s Monthly Shonen Sirius since July 2019. This is also the same magazine that serializes TenSura and the same publisher of Shingeki No Kyojin, Rent a Girlfriend, Tokyo Revengers, and many others.

One of the author’s favorite manga is Shaman King. She wrote the spin-off light novel titled Faust8: (Eliza the Eternal). The story is about How Faust VIII and his wife Eliza met, and the moment of tragedy that took Eliza’s life and led her to be Faust VIII’s guardian ghost. The light novel also received a manga adaptation in 2021.

Shuuichirou Umeda, the actor who voices Sable, the main character, will do his debut as a voice actor in this anime.

The Dawn of the Witch doesn’t have many ecchi scenes compared to many other series. But the author confirmed that the anime will have a famous bath scene with Holt and another character, just like it was portrayed in the manga.

Speaking of Holt.  The author said that she wanted her to have all the traits she felt were ideal for feminine beauty—large boobs, big bottom, a sweet smile, and to be always cheerful.  She told the anime character designer to make Holt’s bottom and legs thicker. And I quote what she said to the character designer “Remember, she’s got a big butt!”

Holt will be a good candidate for the waifu of the season and I expect that there will be a lot of fan art and doujinshi of her.

First is that we had the honor to interview Kakeru Kobashiri, the author of the original work, and we’re posting the interview very soon.

And she was kind enough to sign some copies of the manga and light novel for us, which we’ll be giving away. If you want to win one, just subscribe to our YouTube channel so you’ll receive a notification when we post the interview and when we do the giveaway. I

If you’re already subscribed you don’t need to do anything else. Just sit tight and wait a bit until we post it.

Also, if you’re watching us from the future and the giveaway is already finished, you should still subscribe, because we’ve got more signed copies from other authors and artists, and we’re planning to do more giveaways.

Likewise, let me know in the comments below, who is your favorite character?

Or if you haven’t read the book yet, you can buy The Dawn of the Witch light novel in English, so check it out and then let us know what you think!

Finally, make sure to subscribe and click the bell so you don’t miss it, and I’ll see you in the next video!